Springfield: Removal of the Statue of Pierre Menard on September 26, 2020
A statue of Pierre Menard used to stand on the Capitol grounds. Menard was a successful French Canadian entrepreneur based in Kaskaskia who astutely negotiated his position in the changing political affiliations of Illinois. When the former French territory became part of the young United States Menard became its first Lieutenant Governor. As a merchant Menard had had extensive interaction with the Indians providing furs for the European trade. Living in and near Kaskaskia, he was in a French-Indian milieu. Various historical works refer to Menard’s reportedly congenial relationship with the Indians – based on mutual benefit in trading and later in his positioning in the U.S. government’s interest in Indian lands. These sources praise Menard’s compassion and generosity in assisting Indian tribes various times as they were being displaced, the last time relating to President Andrew Jackson’s Indian Removal Act of 1830 — the irony of that context seems to have escaped critique. Whereas Menard was able to move between the changing European worlds of the Illinois/Mississippi River frontier, the Indians ultimately lost everything. 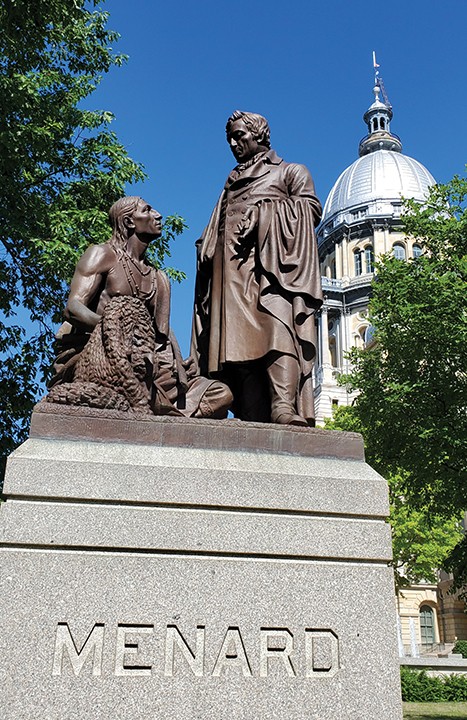 Attention, therefore, must be paid to the former 8-ft high statue honoring Menard. It was sculpted in1886 (Menard died in 1844 so he cannot be blamed for it) and dedicated in 1888. Conceived at the time as showing Menard trading with an Indian and thus representing an equitable bilateral arrangement, today (2020) we must find this statue as troubling as the one of Teddy Roosevelt on the steps of the American Museum of Natural History in New York City where the non-White member of the association is shown – in both cases – in a subservient position looking up at the White person. Thus, these statues manifestly express the racial-cultural hierarchy of the time in which they were made. Yet whereas Roosevelt’s racist views are well-known, with Menard and the Native Americans we are less certain. Yet the manner of representation seen with today’s sensibilities justifies removal of the statue.