The race riot that took place in Springfield on August 14-15, 1908 is so significant that it transcends African American heritage and the city where it occurred. The riot was especially painful because it happened in President Abraham Lincoln’s hometown, a few months before the centennial of his birth.

The riot revealed the systematic racism of early 20th century Springfield, of Illinois, of America. Previously, race riots and lynchings were brushed off as a ‘problem of the South’, but the Springfield riot contradicted that.

In February 1909 in response to the riot, civil rights leaders formed the National Negro Committee in New York City, which would become the NAACP (National Association for the Advancement of Colored People). The NAACP is the oldest civil rights organization in the world.

Study of the 1908 Springfield Race Riot provides tremendously important insight into the history of racial violence in the United States.

The riot was started by a white mob that went on a rampage through a neighborhood of prosperous African American homes and businesses in an area between Mason and Madison, and 9th and 12th Streets, destroying at least 40 houses and businesses. Two leading Black citizens of Springfield were lynched: Scott Burton, 56, who was a local barber and William Donnegan, 80, who was married to a white woman. Both men were beaten to unconsciousness and killed. At least four other bystanders died as a result of the riots, and four rioters were killed by the militia or friendly fire. Uncounted others were injured.

The terror caused by this violence prompted nearly two thousand Black residents to abandon the city and not return. Surrounding cities gave the fleeing residents no quarter, resulting in at least one child’s death due to exposure. Ultimately, history will never know the exact total of causalities from this horrific event. With over forty homes burned to the ground it is possible that some Black residents burned to death in their homes. Contemporary accounts say that Black residents were afraid to list deaths and that they buried victims under the cover of darkness, eventually causing the Black residents to run out of coffins entirely.

A major archaeological project was conducted at the Race Riot Site between 2014 and 2019 by Fever River Research, an outstanding cultural resource management firm. They have recovered vivid material testimony of the race riot, significantly amplifying written documentation. The processing of collections is currently ongoing. The excavations revealed the foundations of five of the dozens of homes that were burned and destroyed during the riot. Other evidence of African American life such as clothes and books from burned trunks and dressers also was recovered. These are currently undergoing preservation. 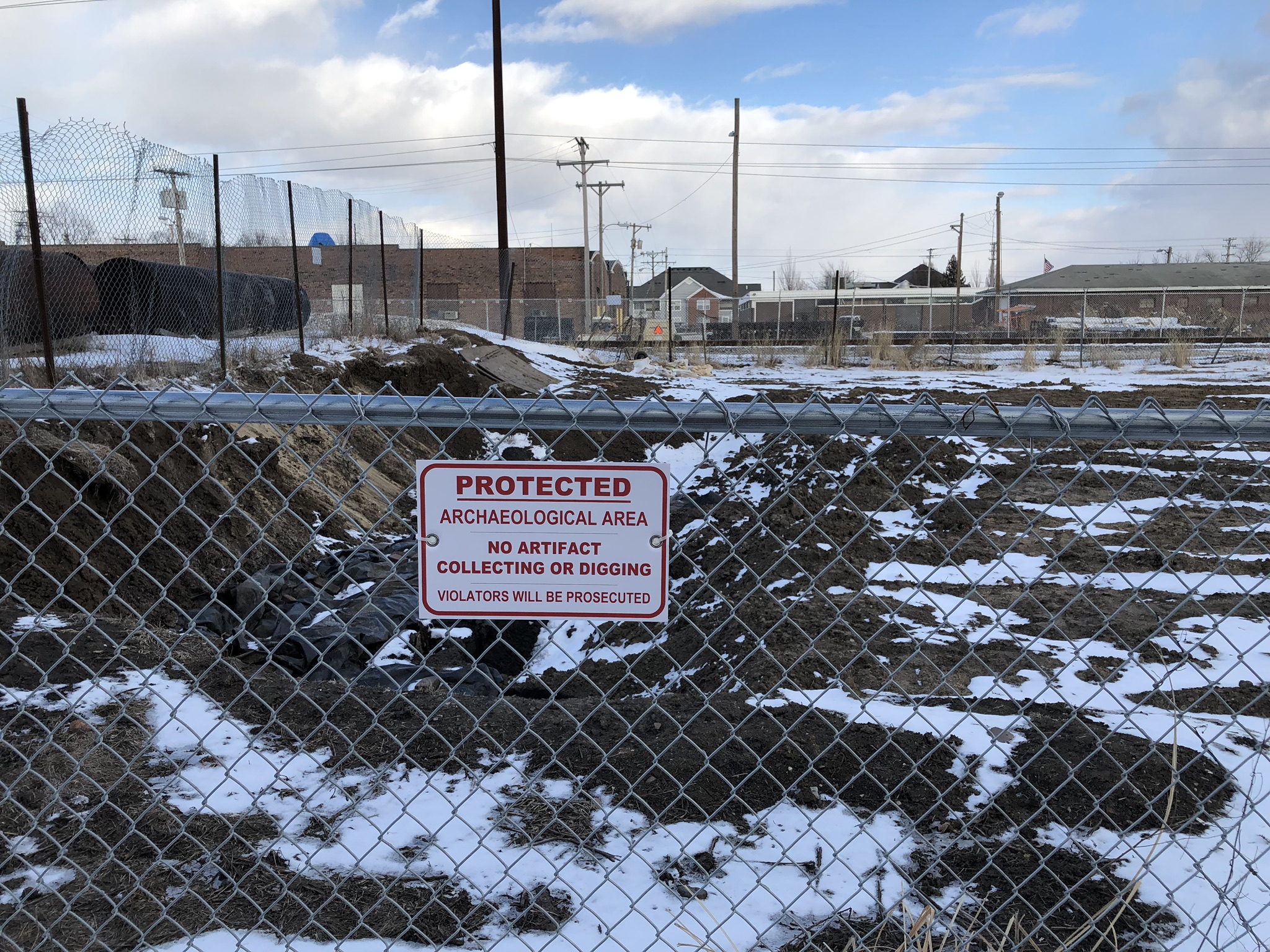 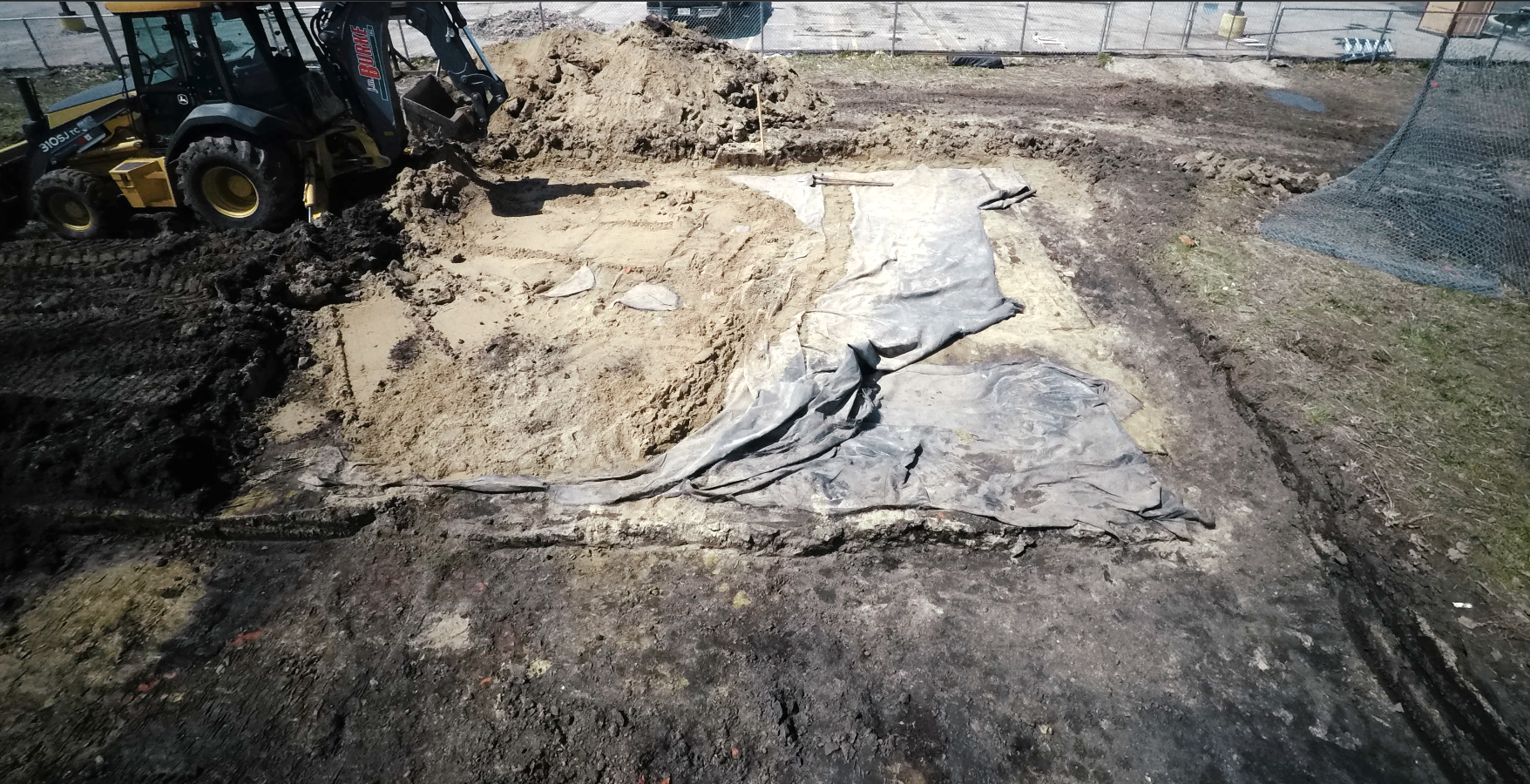 (above) Week 1: clearing the surface of Excavation Locus 1 at the Race Riot Site
(below): excavation well under way at the site 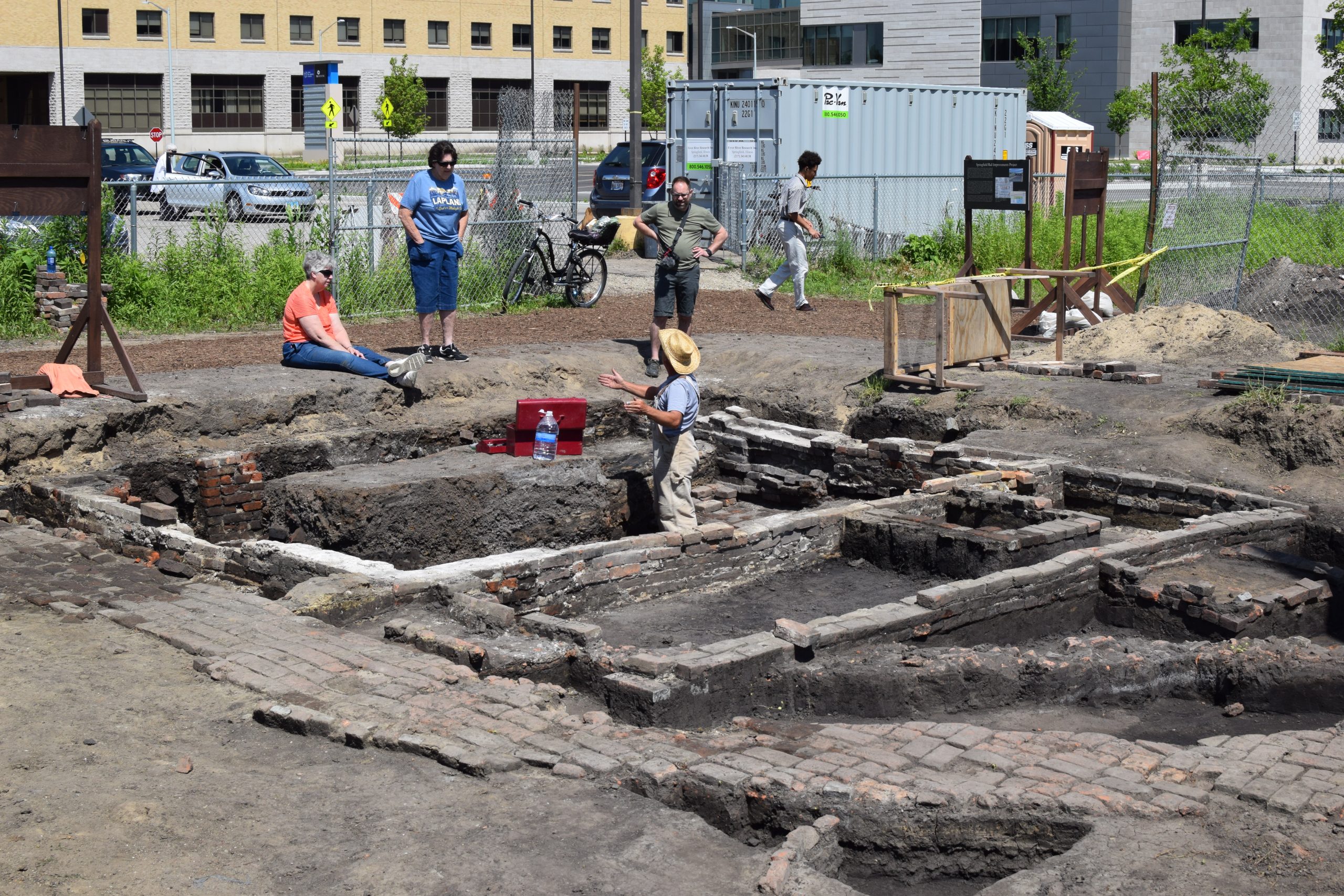 The 1908 Springfield Race Riot was designated by the U.S. Department of Interior as the 30th addition to the African American Civil Rights Network (AACRN). The AACRN helps ensure that the history of the Civil Rights Movement and the sacrifices of the people involved are remembered and commemorated. The designation formally recognizes the historical and national significance of the terrible event of 1908 and the catalytic role it played in the creation of the NAACP.

The AACRN designation recognizes the Race Riot Site as an important part of our nation’s history. Ideally, it will help efforts to preserve the remaining footprints of the affected neighborhood. Ultimately, the Race Riot Site should be named as a National Historic Monument and unit of the National Park System. This will require Congressional action and a successful request to the Department of the Interior under which the National Park System operates. On December 26, 2020 Springfield’s newspaper, State Journal-Register, reported (article by Brenden Moore) that Congress has approved funding for the study that can lead to the NPS designation. That funding will pay for a special resource study to determine which NPS designation the Race Riot Site should receive, and that will be evaluated by the U.S. Department of the Interior.  The department is also tasked with considering other (i.e., non NPS) alternatives for the preservation, protection and interpretation of the study area that could be provided by the local, state and federal governments and private and nonprofit organizations. It is estimated that the study, with its conclusions and recommendations, will be completed in the coming three years and then presented to the appropriate congressional committees. The effort in Springfield  has received significant, bipartisan support at all levels of government.

Among the many notable visitors to the site has been Illinois’ U.S. Senator Tammy Duckworth. 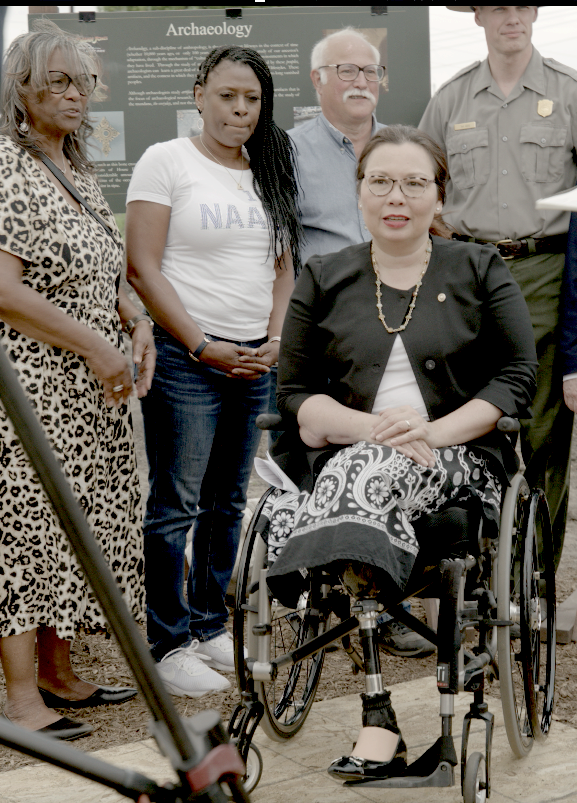 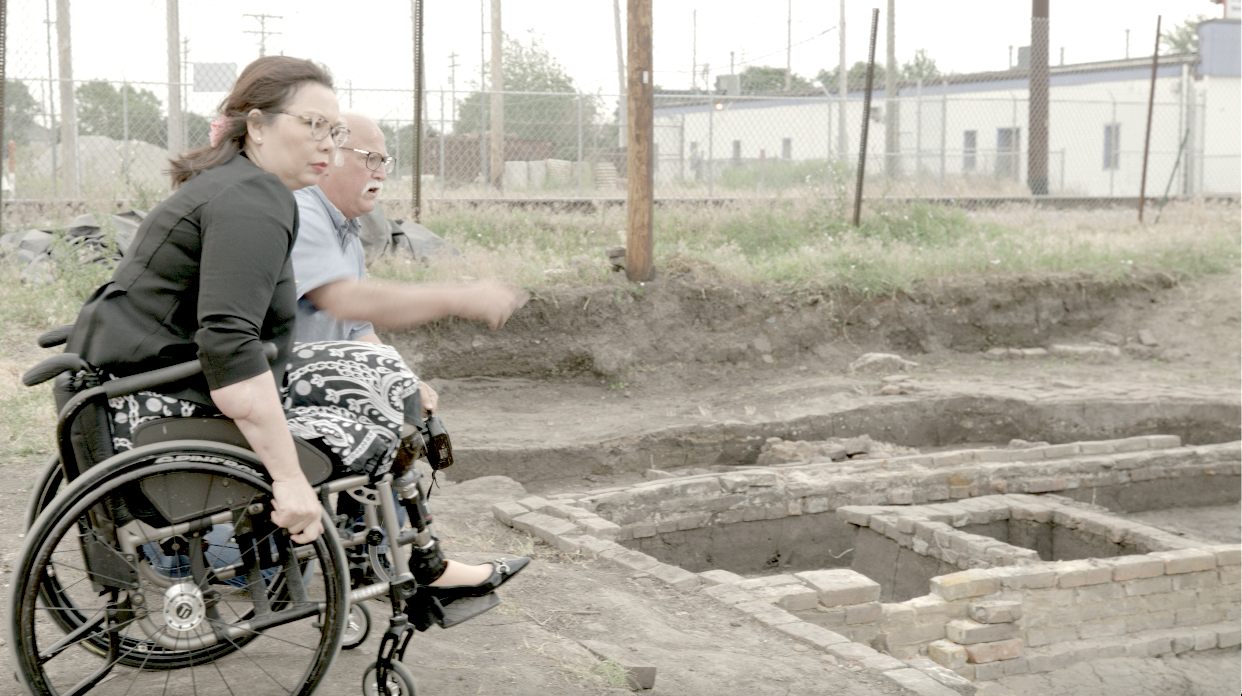 On August 14, 2018 eight redesigned historical markers were rededicated in Springfield. They are part of the Race Riot walking tour. Key speakers in the event were Teresa Hayley, President of the Springfield NAACP, Mayor Jim Langfelder, and former NAACP President, Carl Madison. The ceremonies included the reading of a Proclamation in the City Council Chamber. Below we include hyperlinks to videos of the events on that important day in Springfield.

Like other “sites of conscience”, there are lessons to be learned from the Race Riot Site. That is why its preservation as well as adequate educational interpretation is necessary. Saint Johns Hospital, which is alongside part of the area, has been a superb community partner in this regard. Inside its public lobby there is a mural by artist Preston Jackson and associated explicative and illustrative materials. The reason for this is not just the hospital’s proximity to the Race Riot Site now. It is because the hospital received and attended to the wounded in 1908. 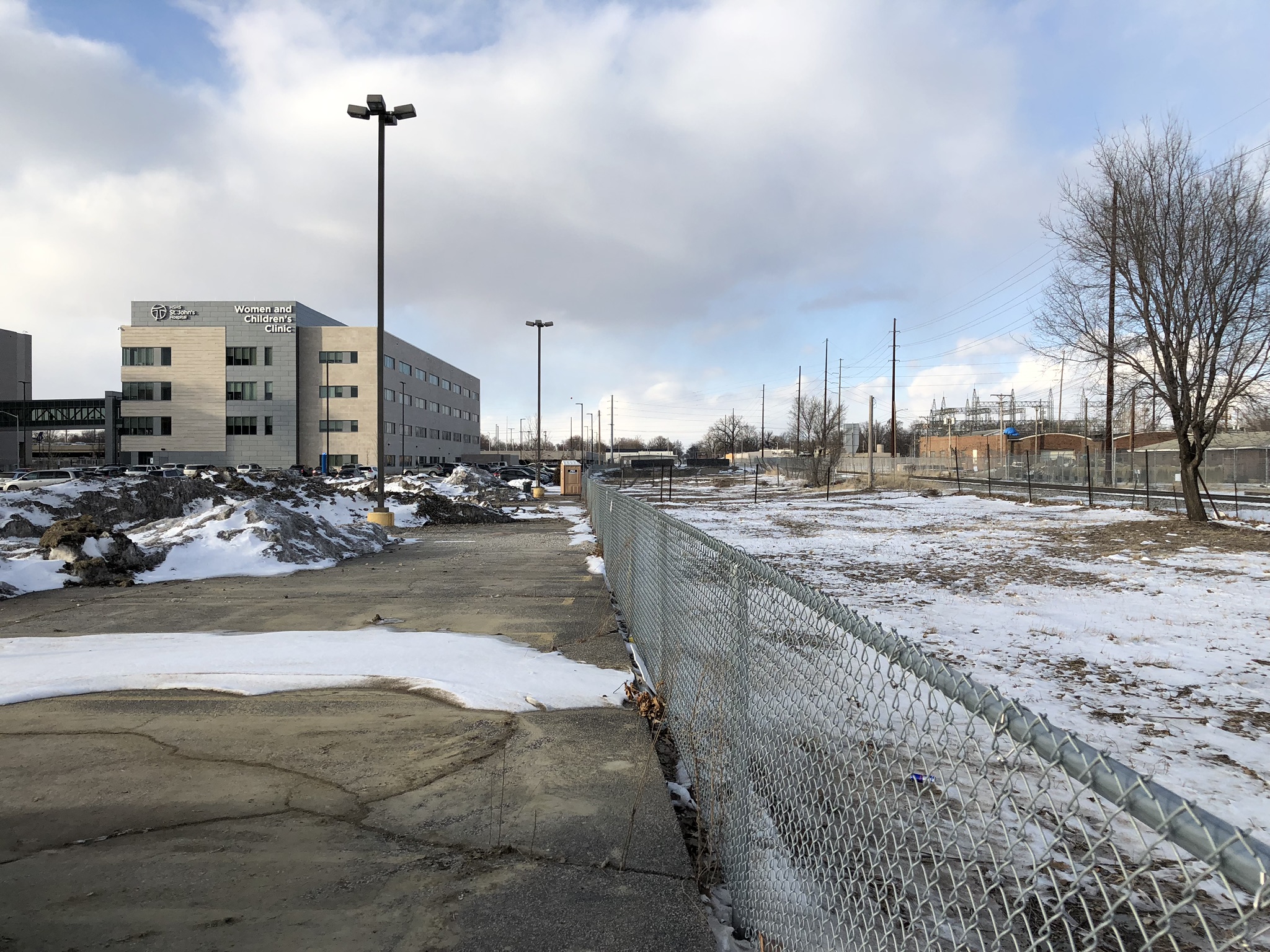 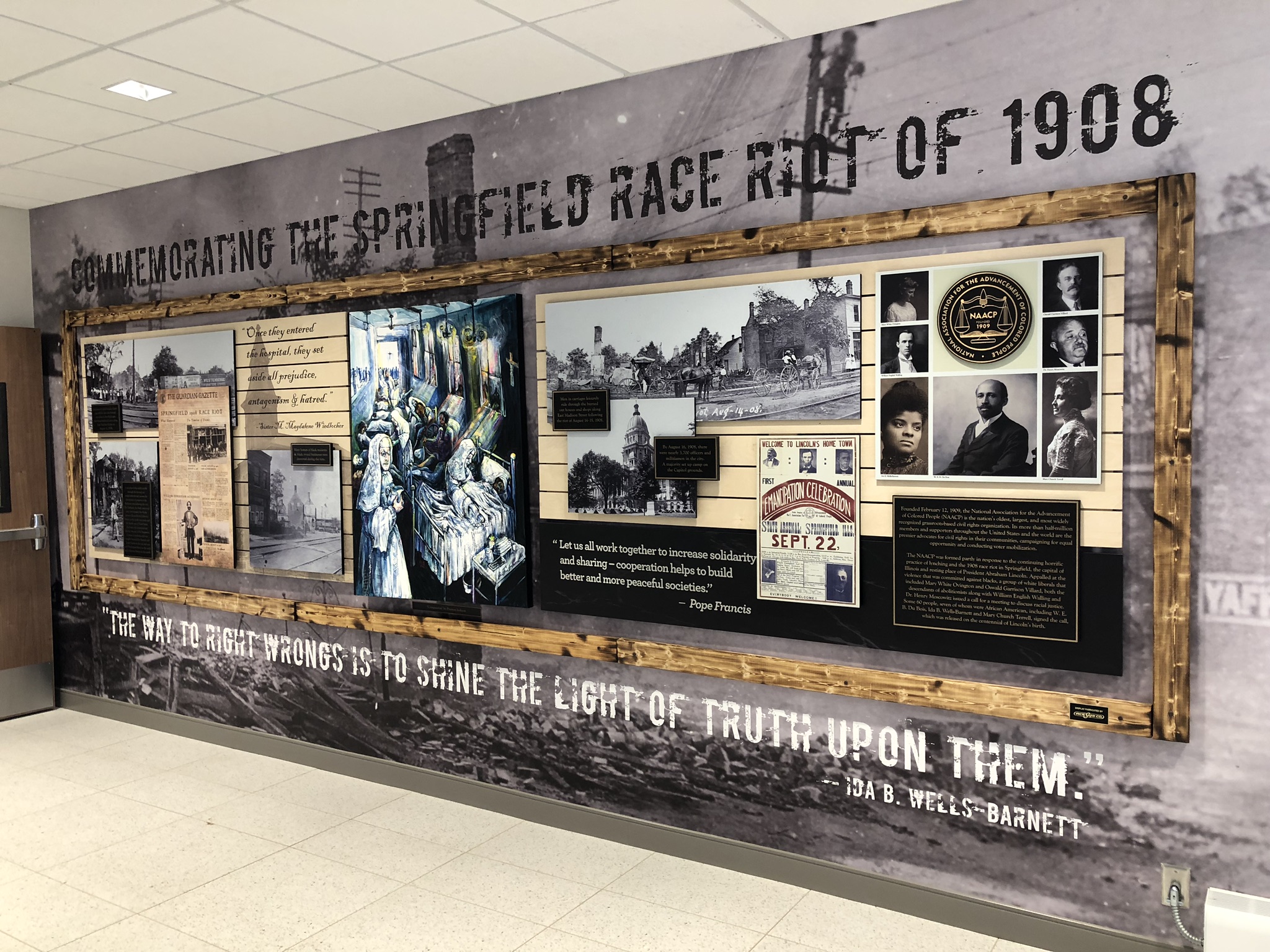 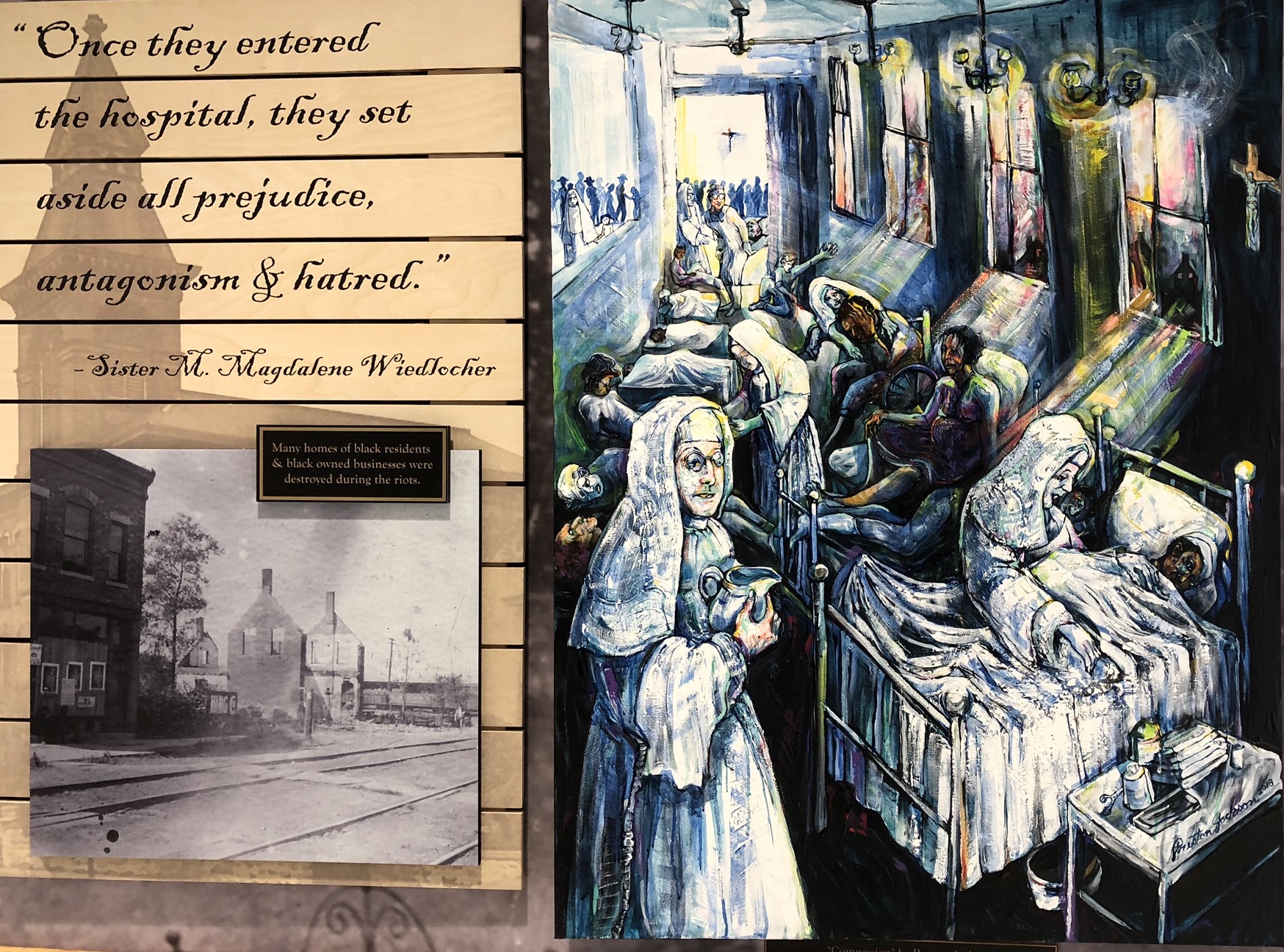 THE RACE RIOT SITE SHOULD BE PRESERVED AND INTERPRETED! SAVE IT!
What are the current plans for this archaeological area?  Look at the two photographs immediately below. The five houses at this location have been mitigated, leaving some of the archaeological resources intact underground. The proposed monument would lay concrete over the archaeological features to further protect these vital resources. 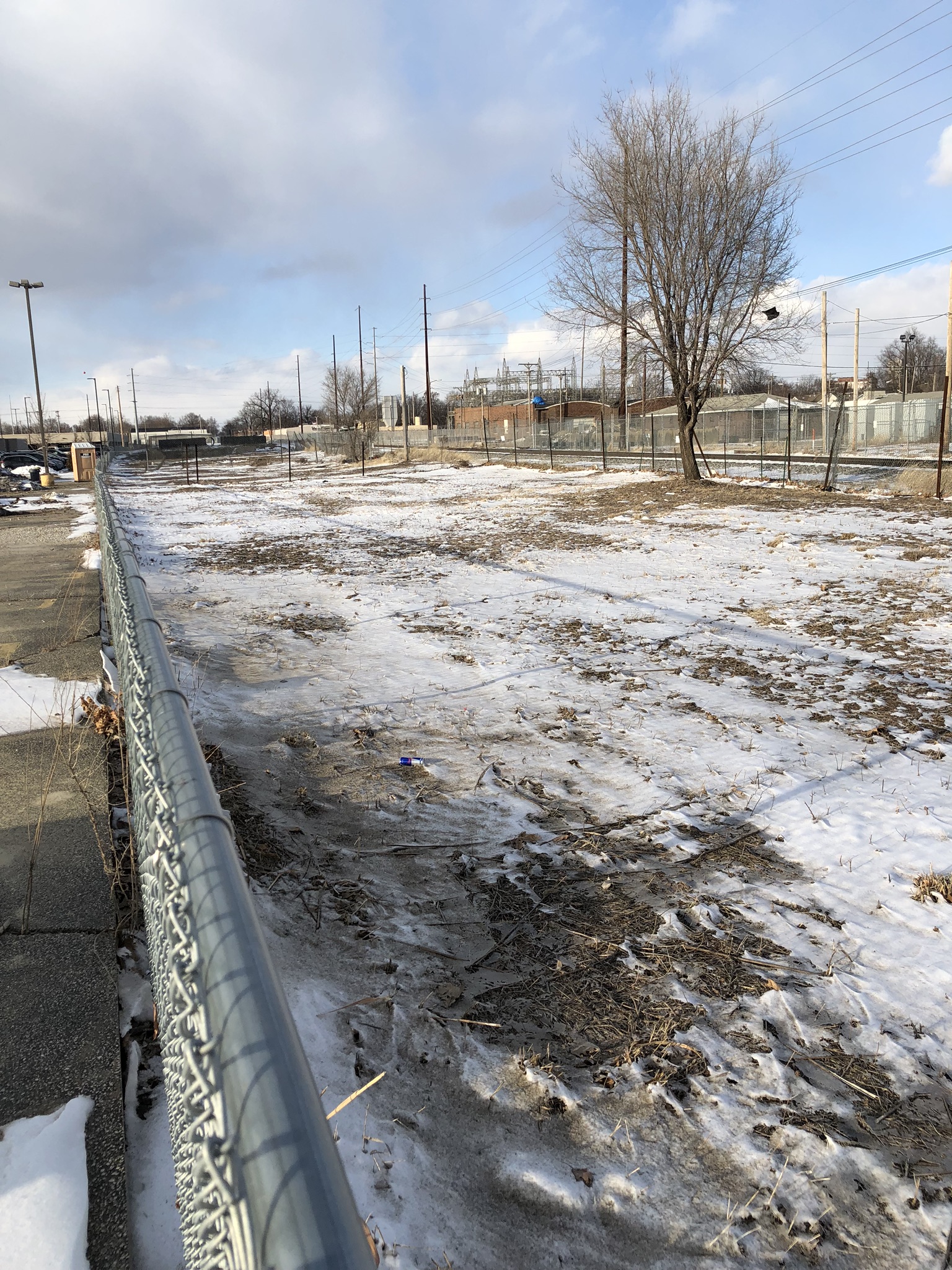 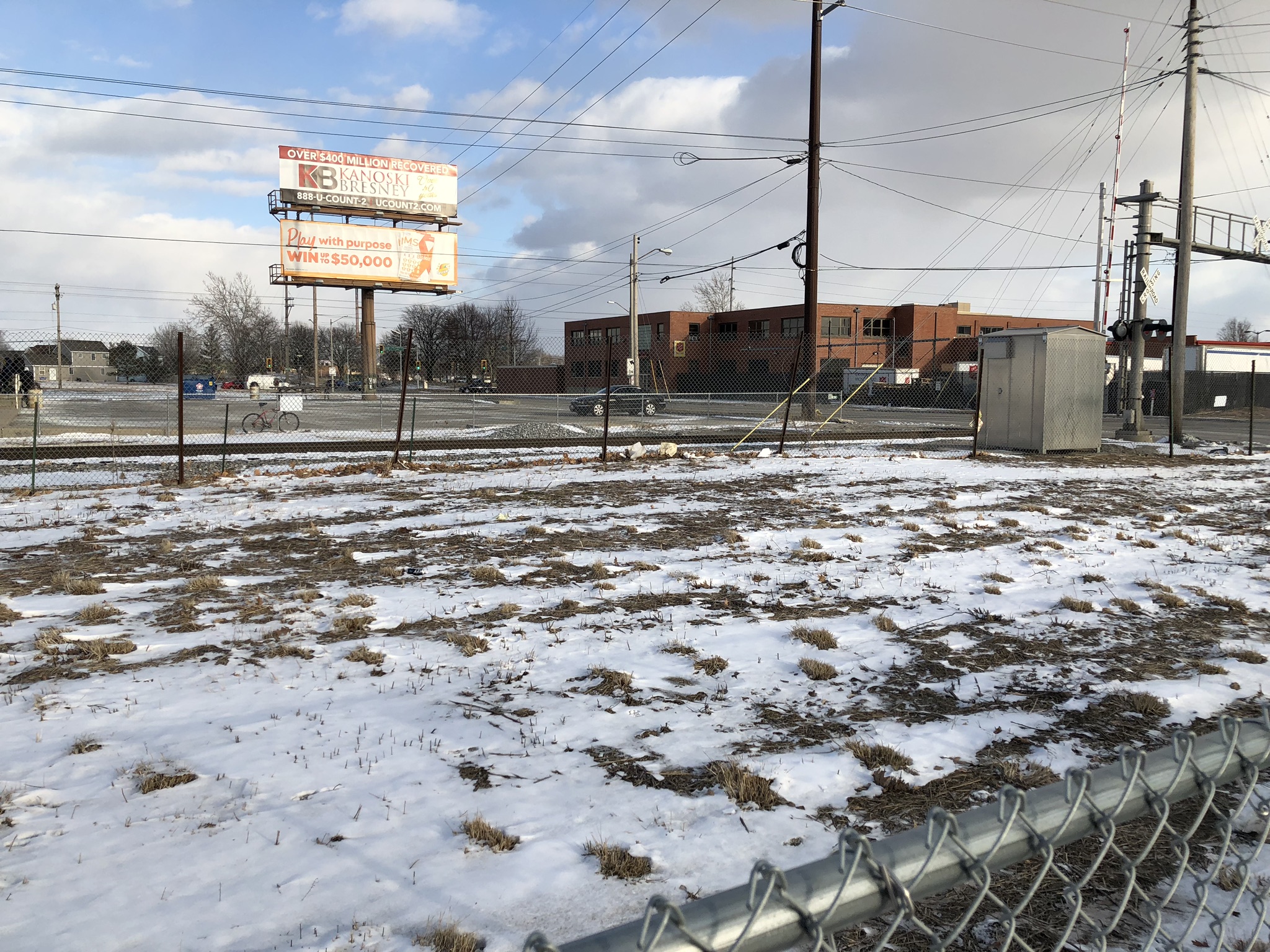 The AACRN includes properties, facilities, and programs related to the struggle for civil rights in the United States. With the addition of the 1908 Race Riot Site, there are currently 30 elements in the AACRN, 18 of which are administered by the National Park Service, including Martin Luther King Jr. National Historical Park, Mary McLeod Bethune Council House National Historic Site, Port Chicago Naval Magazine National Memorial, Pullman National Monument, and Selma to Montgomery National Historic Trail.

2) Leading African American citizens of Springfield discuss the legacy of the riot https://www.youtube.com/watch?v=As8WbSGKpcM 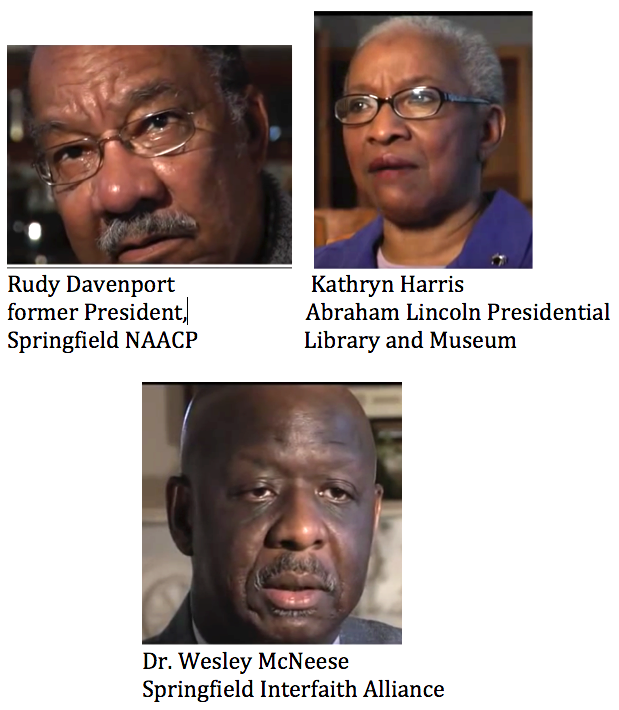 Springfield Had No Shame, part 2 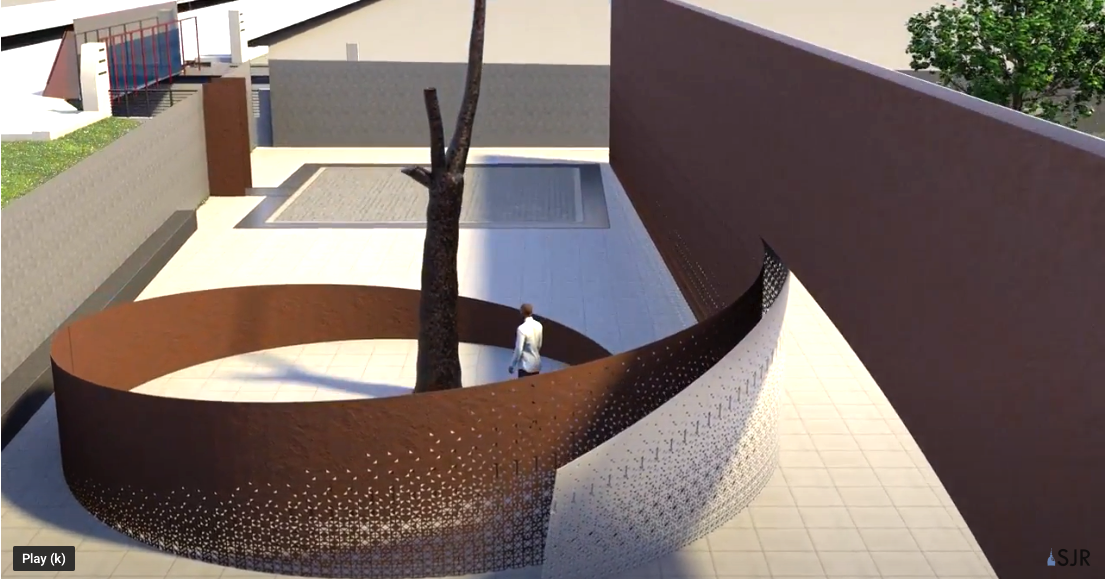 Additional exhibits are in the planning stages, based on archaeological items excavated by Fever River Research. The NAACP has also proposed a memorial for the Monroe Street site, which may also host a National Monument or National Park

AND LOOK AT THESE WEBSITES FOR ADDITIONAL INFORMATION: