Curriculum: Social Studies/land use and movement of peoples

Lecture:
(1) teach the immigration of immigrants from the island of Madeira, Portugal using the information on this website https://mythicmississippi.illinois.edu/portuguese-il/
(2) study 1867 Map of Springfield https://www.loc.gov/resource/g4104s.pm001880/?r=0.828,0.267,0.097,0.044,0  Note the orientation on this Library of Congress map. Do not get confused: Carpenter Street runs E-W. It is on the upper far right of the map as it is manipulated with a mouse and as one scrolls further to the right one sees Enos Street as the edge of town. Carpenter Street is two blocks from Enos Street.
A multi-car railroad steams along the tracks beyond the edge of the urbanized town into fields. Carpenter Street runs perpendicular to the railroad tracks. Note the button placed on the map image by the Library of Congress to facilitate manipulation of the map. 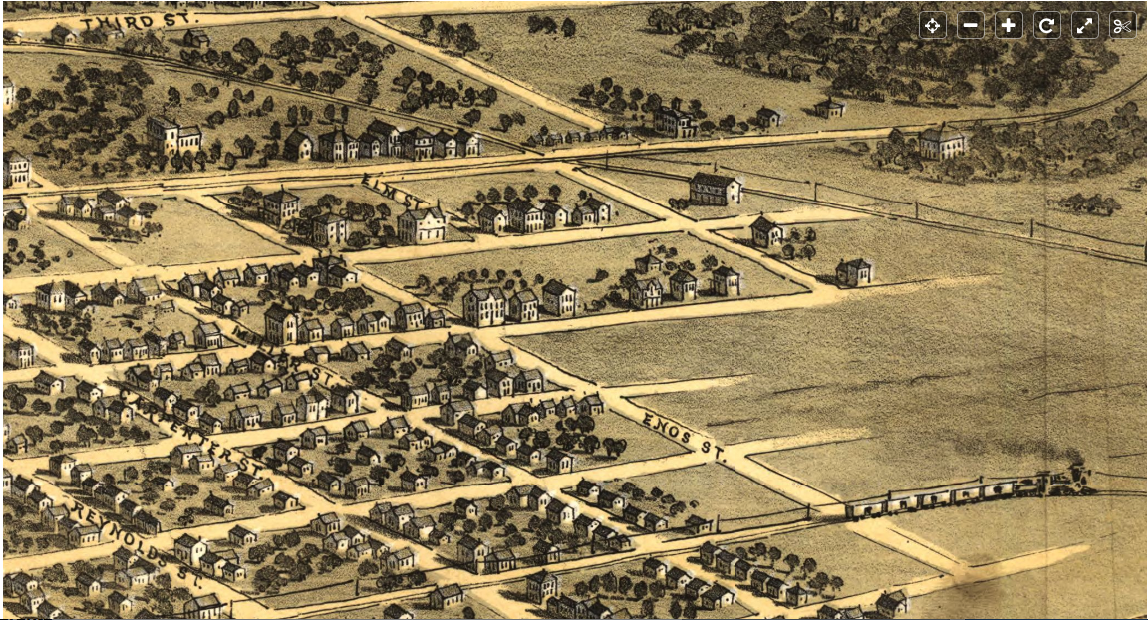 (3) explain what a story map is
(4) introduce the concept of “urban landscape”
(5) manipulate slides 1-13 on the Story Map of the Madeiran immigrants https://arcg.is/1SuPzi  to tell the story of the exiles before they purchased land in Springfield
(6) look at Google Earth or Google Maps cued to Springfield today
(7) Discuss with students the reasons for the dramatic change in housing prices in the century and a half since arrival of the Madeirans (increased urbanization, expansion of service availability such as grocery stores, theaters, restaurants, schools; Springfield as the state capital; increased land use; migration after the Civil War)
(8) present the 19th century history of Jacksonville, where the Madeiran immigrants also settled

What students will do:
* Use Google Earth and Google Street Views
* Use and study the Story Map of the Madeiran immigrants
* Find Carpenter Street on the 1867 Map of Springfield (Library of Congress) to see where many of the exiles chose to buy land
* Discuss what features they see in the area
* Locate Carpenter Street with reference to the Old State Capitol and Abraham Lincoln’s home at 413 S. 8th Street
* Discuss the reasons why the cost of land might have changed so dramatically in the last 160 years.

IN CLASS ACTIVITY
Project the 1867 map of Springfield on the screen and overlay it on top of Google’s current map of Springfield. Discuss these questions in class:
* Are the streets the same in name, width, orientation?
* Looking at both maps, what is the most significant shift of land-use (i.e. residential to commercial, agricultural to suburban)?
* What major historical events might have impacted these changes?

HOMEWORK EXERCISE
Without requiring computer graphic skills, give the students a blanked out map of their home town (so that landmarks are not labeled, only streets) and ask students to create their own story map on paper. The goal is for students to tell a coherent story in spatial terms about something in town. This can be an aspect of local or family or personal history. Students will place a minimum of six numbers on the clean map and write a few sentences about each point. They should add an image for each numbered point (if they can’t print out a thumbnail from a cell phone photo, this image be drawn just as a place holder, with an addendum describing what the image actually would be).