Before there was a State of Illinois there was a “Pays des Illinois” — the Indian lands explored and then colonized by France through its New France (French Canadian) venture of trade and missionization.

The French occupation of southern Illinois is historically fascinating and has left a significant footprint on the ground. We start this webpage with the story map made by Emma Verstraete (MA, ABD, Department of Anthropology, UIUC) as an introduction to the history and geography of this period. Click on blue hyperlink:   https://arcg.is/0e8GzS

The French presence in southern Illinois had its epicenter in the long-disappeared town of Kaskaskia, artifacts from which are visible and visitable in the “new” Kaskaskia. Importantly, although a massive flood of the Mississippi River wiped out Old Kaskaskia in 1881 (by which time it was an American town whose fortunes had declined), that Old Kaskaskia was the southern end of a remarkable series of originally French sites that run north to Cahokia and once were connected by the Kaskaskia-Cahokia Trail. Use of that trail continued into the American period. Route 3 parallels it to the east. 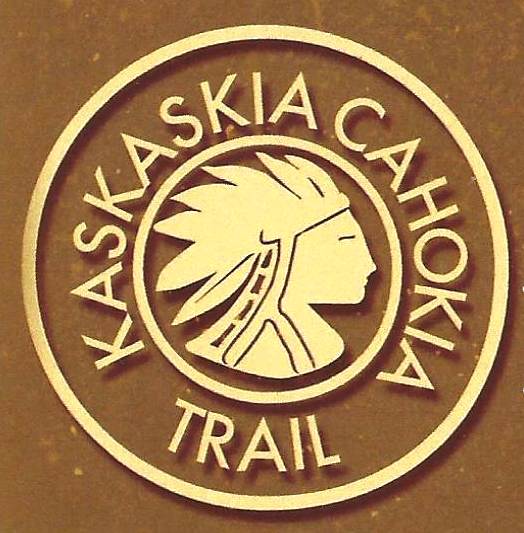 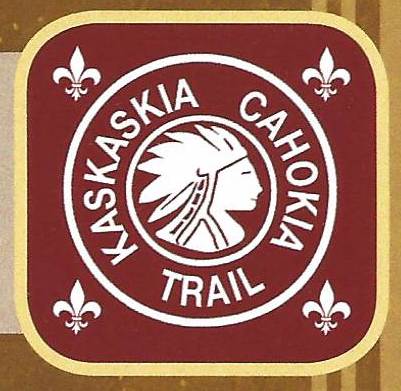 The two logos for the Kaskaskia-Cahokia Trail are quite interesting. The one of the left refers to its creation by the Native American Kaskaskia and Cahokia tribes. The one on the right, with the addition of the fleur-de-lis speaks to the French missionaries who created the two French towns, each of which had Native Americans in their missions.

In various of the towns on this map, one can find signposts with the KCT logo. The first of these is in the new Kaskaskia commemorating its origin in the old Kaskaskia. A wonderful GIS exercise that the Mythic MIssissippi Projects hopes to do is to plot every KCT on a story map and thus facilitate a walking-biking experience for adventurous history-oriented tourists. 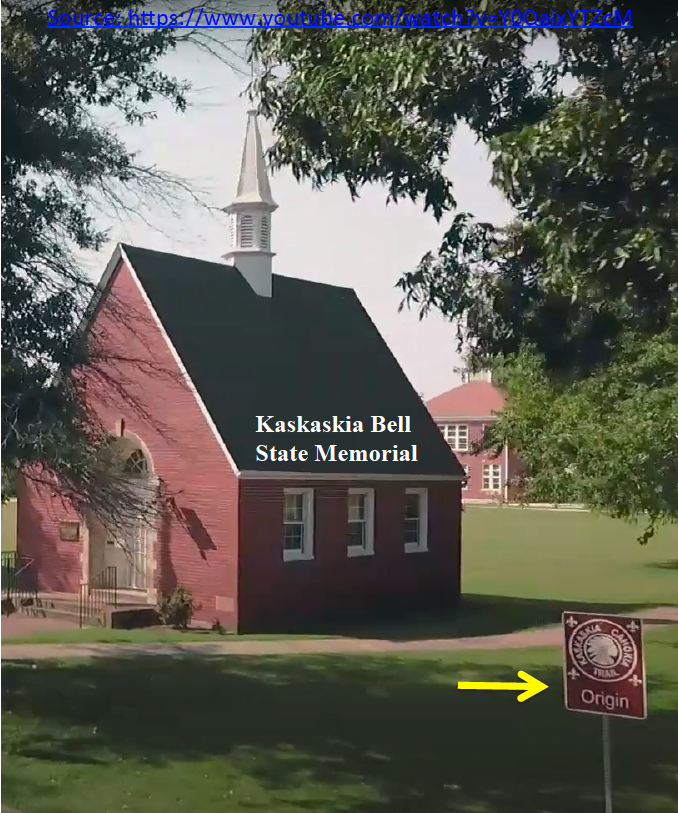 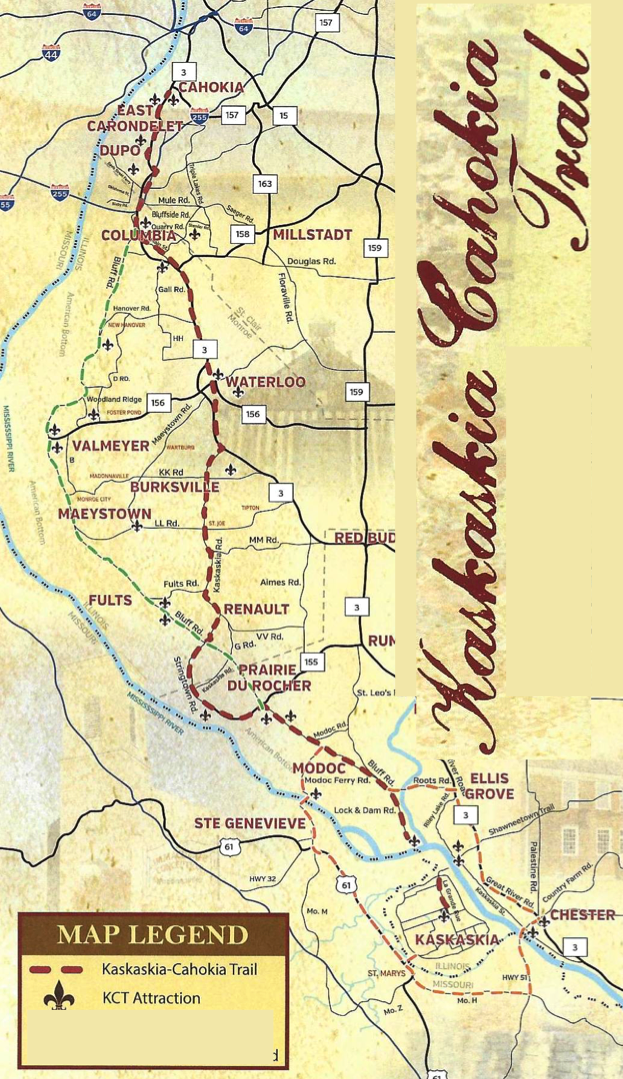 Indeed, ultimately we can extend the French occupation in southern Illinois nine miles north beyond the town of French Cahokia to the mission established by Cahokia’s Seminarians atop the humongous ancient earthen platform mound that Native American people built more than six hundred years earlier – that archaeological  structure is known, appropriately, in the literature as Monks Mound.

The still occupied or still visible/visitable places of southern French Illinois are shown on this map: 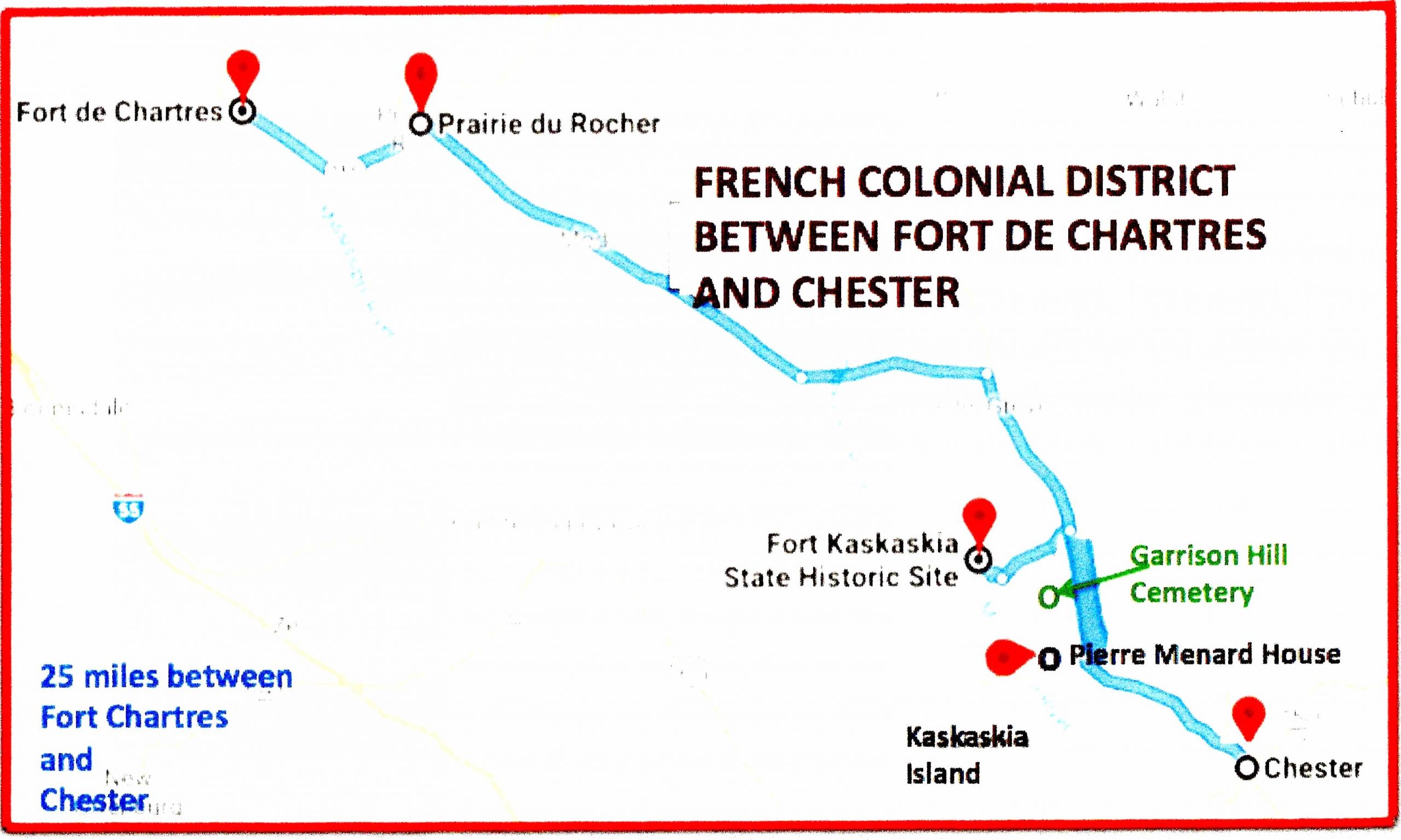 In 1975 the National Register of Historic Places recognized the entire French Colonial District from Kaskaskia to Prairie du Rocher. In keeping with the Mythic Mississippi Project’s goal of “Initiate, Investigate, Invest in Illinois” we would like to see Chester as the gateway to this French Colonial District, meaning that tourists would come down Route 3 and over the Chester and then proceed north to visit the string of interesting attractions.

The “French Creole Corridor” is another well-developed route through the Mid-Mississippi River Valley developed by Les Amis in St Louis. That corridor is bi-state and includes beautiful and architecturally rich Ste Genevieve, Missouri, but almost all of the attractions are in Illinois. One can drop down from St. Louis, visit Ste Genevieve and cross by ferry at Modoc to the Illinois side. The “French Creole Corridor” was developed in conjunction with Illinois South Tourism Bureau, which is now part of Great Rivers & Routes DMO is Illinois. As explained above and on our project’s home page, our goal is to promote tourism on the Illinois side of the Mississippi River through exploitation of Illinois’ cultural resources.

A new and more comprehensive version of the “French Creole Corridor/French Historic District” is under development by a large citizen, community and multi-institutional, multi-governmental-level organization based in Prairie du Rocher. Their first concern is the levees, given the disaster of the 2019 floods. But consideration of the levees and the natural/man-made environment has led to the addition of cultural resource management. We support the vision of their strategic plan for developing the French sites discussed in our website.

In 2019 the Foundation for Illinois Colonial and American Studies was established “to preserve, record, and promote the French and early American legacy of Illinois … (circa 1670 -1849) …” A series of publications is planned by the group. They can be followed on facebook.