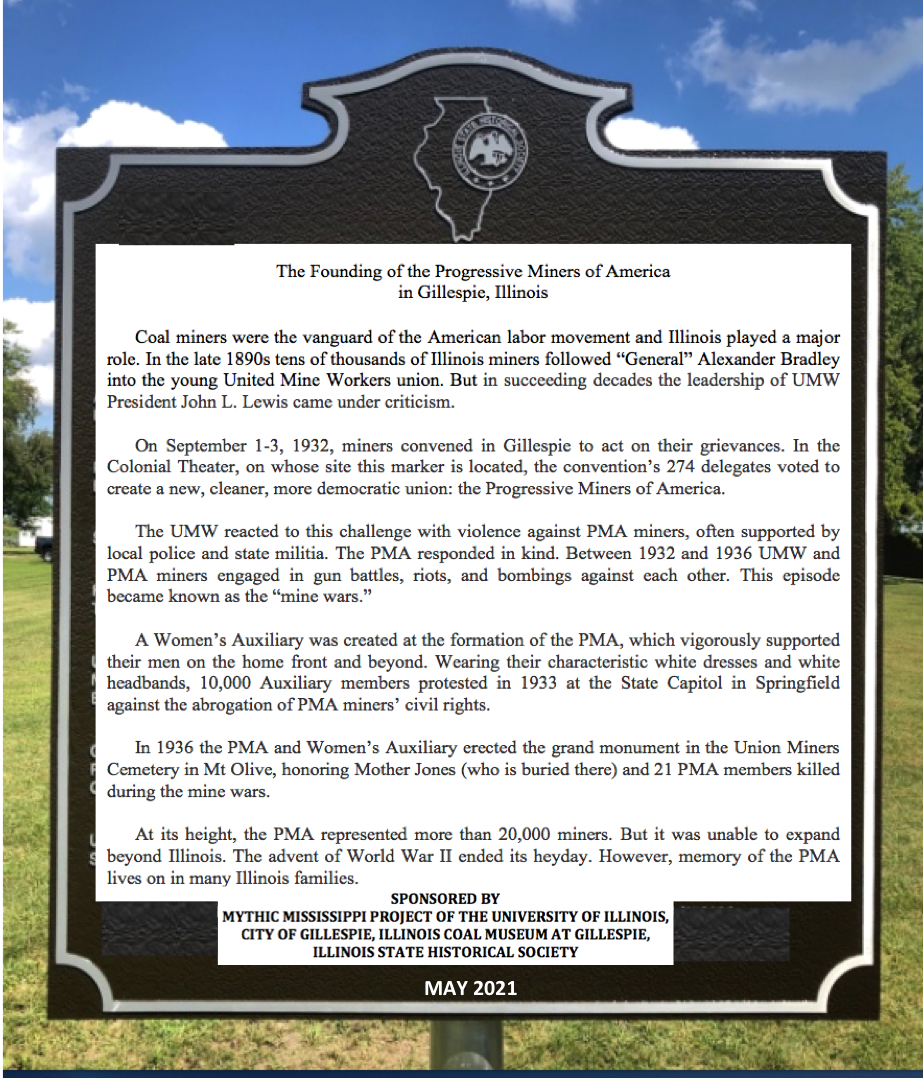 Mother Jones and Mt Olive
Mary Harris Jones – more widely known as Mother Jones—was adoringly called “the miners’ angel” by the coal miners for her peripatetic advocacy of their cause. She knew Mt Olive.

And she was passionate about the “Battle of Virden”, whose strikers and martyrs she admired greatly. Mother Jones stipulated in her final directives in 1924: “… will the miners see that I get a resting place in the same clay that shelters the miners who gave up their lives on the hills of Virden … it will be my consolation… to feel I sleep under the clay with those brave boys.” Her request was honored. She died on November 30, 1930. Thousands attended her funeral and visitation at the Mt Olive Church of the Ascension and Odd Fellows Hall, before her burial in Union Miners Cemetery in Mt Olive. In 1936 the Progressive Miners of America erected the present monument to Mother Jones in the cemetery. On its base are plaques honoring the PMA miners killed in the “mine wars” between the PMA and United Mine Workers that raged across southern Illinois as well as plaques for three of the four miners from Mt Olive who fell at the “Battle of Virden” (1898) as well as for General Bradley (d. 1918). The inauguration of the massive Mother Jones monument was attended by a crowd even larger than the thousands who had been present for the burial of Mother Jone in the cemetery.

“General” Alexander Bradley (1866-1918)
“General” Alexander Bradley was born in England but spent most of his life in Mt Olive. He became a charismatic, audacious, radical union organizer for the United Mine Workers in the southern Illinois coal fields, particularly in 1897 when he led marches into many of the coal towns where he succeeded in unionizing the miners while facing great opposition from the mine owners. He grew the UMW from fewer than four hundred to tens of thousands.  Bradley’s leadership in the coal fields included a prominent role at the “Battle of Virden” (October 12, 1898), which he led against the coal company bosses who refused to honor the previously negotiated national miners’ wage. Moreover, Bradley and the UMW created a space in which the numerous European immigrant miners were welcomed alongside the “native” miners. After his extraordinary labor actions Bradley returned to work in the coal mines and faded from the labor scene where he had been so dominant. Bradley died of illness in 1918. He is buried near the Mother Jones Monument in Mt Olive’s Union Miner Cemetery. This marker celebrates Bradley’s remarkable achievement of mass unionization in the coal fields of central and southern Illinois.

Union Miners Cemetery, Mt Olive
The Union Miners Cemetery is the only labor union-established and union-owned cemetery in the United States. It is the result of the “Battle of Virden”, fought in the eponymous town on October 12, 1898, when the Chicago-Virden Coal Company refused to honor the national wage negotiated by the United Mine Workers union. That day an armed struggle broke out between miners and the company forces attempting to use scabs. Thirteen men were killed – eight union miners, four mine guards and a company employee. The bosses then capitulated and agreed to the legal wage. The owner of the privately-owned town cemetery in Mt Olive did not want any of the dead miners to be buried there so that the cemetery would not become a labor shrine. Therefore, the UMW purchased land in Mt Olive to create their own dedicated union cemetery for the fallen miners and all miners in the future. In 1932 the cemetery was deeded to the breakaway Progressive Miners of America union. Today a perpetual care committee tends the cemetery with the help of labor unions around the country, including the UMW, which is the primary supporter of the cemetery. The cemetery’s labor history significance is recognized by inscription on the National Register of Historic Places (1972).