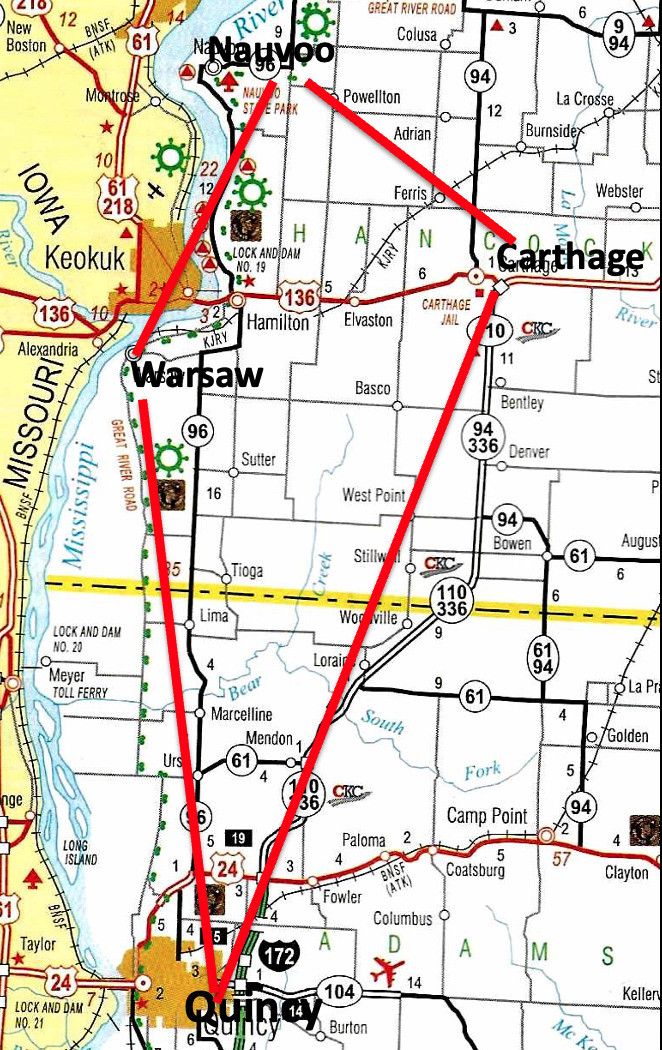 The four towns are keystones in the oppositional forces of religious tolerance and religious intolerance, operating in the pioneer era of the United States. Ultimately, it might be possible to link the four towns in a nomination to the International Coalition of Sites of Conscience.

A possible connection to the project’s African American heritage route
Here we present an idea that intrigues us, from a June 2022 lecture by Dr. Nancy Davis (Curator Emeritus, National Museum of American History, Smithsonian Institution) concerning the possible engagement of the Mormons at Nauvoo with the town of New Philadelphia, which is a hallmark of the African American heritage route proposed by our project. Dr. Davis’ conceptualization of the multiply colonized landscape of western Illinois between 1836-1946 suggests a layered tourism route based on African American and Mormon interaction or at least proximity.

New Philadelphia (45 acres, platted in 1836) existed in a context of nearby settler communities, just as the Mormons in Nauvoo (est. 1839) inhabited – however briefly – a landscape of neighboring pioneer settler communities. They were separated by a distance of less than 70 miles. Nauvoo was located along the Mississippi River and New Philadelphia was about 20 miles to the east of it. Western Illinois offered rich soil and the convenience of the Mississippi River as a commercial conduit.

During the early 1800s Illinois was being “unsettled” with Native American tribes being dispossessed and expelled from their ancestral territories. This process of alienation was exacerbated by President Andrew Jackson and Congress’ promulgation of “bounty land warrants” in today’s Midwest, given to the veterans of the War of 1812 (a practice that originated during America’s Revolutionary War, originally for land in Ohio). Whether veterans migrated to their new land or sold their lots to others, the result was the same, a de-indigenized landscape with the Mississippi River as the new country’s effective settlement boundary.

Illinois’ military bounty lands became available in 1817, the year before official statehood. Free Frank McWorter, who had bought himself out of slavery, acquired a quarter-section of land (160 acres) in the Illinois military tract of Hadley township in Pike County. Eventually he acquired 500 acres. Free Frank and his family (whose freedom he purchased) were the first settlers in the township. They farmed and raised livestock, the goods from which were transported on the Mississippi River. Other consumer goods arrived and left by road and train in addition to the river. The market town of New Philadelphia prospered, attracting African-Americans as well as European-Americans to settle there.

Nauvoo was also established within the Illinois military tract, its Mormon residents taking advantage of affordable property values in the existing small town of Commerce (which they renamed Nauvoo) and, like the McWorters, also fleeing persecution and oppression. New Philadelphia and Nauvoo were both refuges from hostile social and legal practices.

It can be speculated that the McWorters and their New Philadelphia neighbors were aware of Nauvoo. We don’t know if New Philadelphia traded with Nauvoo or supplied the city with goods yet it should be noted that Nauvoo did not have a market center, suggesting that Nauvoo engaged with other communities for the provisioning of some of its needs. Newspaper items discovered by the New Philadelphia Archaeological Project speak about Solomon McWorter, son of Free Frank and Lucy, shipping his apples north to Wisconsin via the Mississippi River. With that being the case, it is inescapable that he would have seen Nauvoo en route, with its temple standing atop the bluff of the city.