Cahokia (not to be confused with the ancient prehispanic metropolis – Cahokia Mounds) was founded in 1698-99 by French priests from the Seminary of Foreign Missions. They were known as Seminarians and were not Jesuits (such as those who founded Kaskaskia). In fact, the two religious orders competed with each other for converts and position in the pays des Illinois. The Seminarians established the Mission of the Holy Family in Cahokia and the tribes they sought to engage were the Tamaroa and the Cahokia (hence the name the French town received). Cahokia (along with Peoria and Prairie du Rocher) is the oldest continuously occupied European settlement in the State of Illinois. And, indeed, unlike the Kaskaskia who migrated to the peninsula between the Illinois and Mississippi rivers in 1703 where the town of Kaskaskia was created, the Tamaroa and Cahokia Indians were already in the area that became Cahokia by the latter quarter of the seventeenth century (i.e., before the Seminarians arrived).

It is a point of historical interest that continues the unfortunate confusion of identical names that in 1735 the Seminarians actually did establish a mission and Native American village on the broad first terrace of the largest prehispanic mound at the ancient site of Cahokia Mounds. That mound is known in the archaeological literature as Monks Mound for this reason. We do not deal the Seminarian mission atop Cahokia Mounds here but refer readers to this key reference work: The River L’Abbe Mission. A French Colonial Church for the Cahokia Illini on Monks Mound, by John A. Walthall and Elizabeth D. Benchley. Studies in Illinois Archaeology No. 2, Illinois Historic Preservation Agency, 1987.

Rather, here we are concerned with the French town called Cahokia. As at Kaskaskia, the mission itself sought to have the Indians living there so as to convert and acculturate them. The French settlers lived nearby in a separate village. Unlike Kaskaskia, which from its origin was nevertheless, hybrid due to intermarriage, we have the impression from the secondary literature (i.e., not the original French language documents in archives) that Cahokia was a more separated social environment.

Most of the population of French Cahokia was French Canadian by birth. The town grew as indicated by reports of visitors, in censuses, and on maps. In 1723 there may have been a few as five dwellings. There were at least 126 habitants (the agricultural settlers) by 1752. Population had grown to at least 300 by 1770. An often reproduced map by a visiting British officer and cartographer shows Cahokia ca. 1770 (below). In his definitive study of several French Colonial domestic sites, archaeologist Robert F. Mazrim of the Illinois State Archaeological Survey has detected that various original streets of French Cahokia are overlain by modern streets. 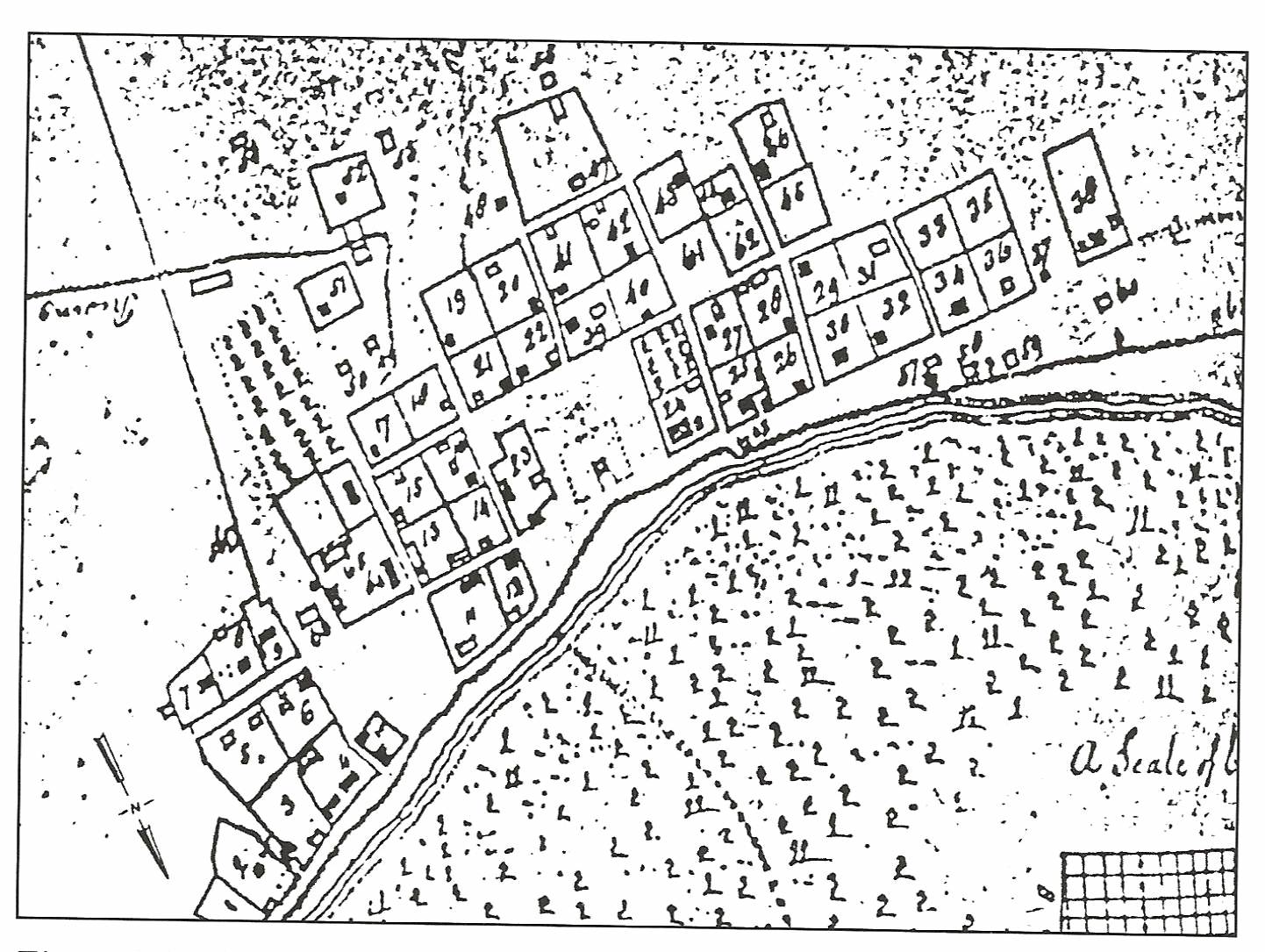 Importantly, in 1799 the Church of the Holy Family was built. 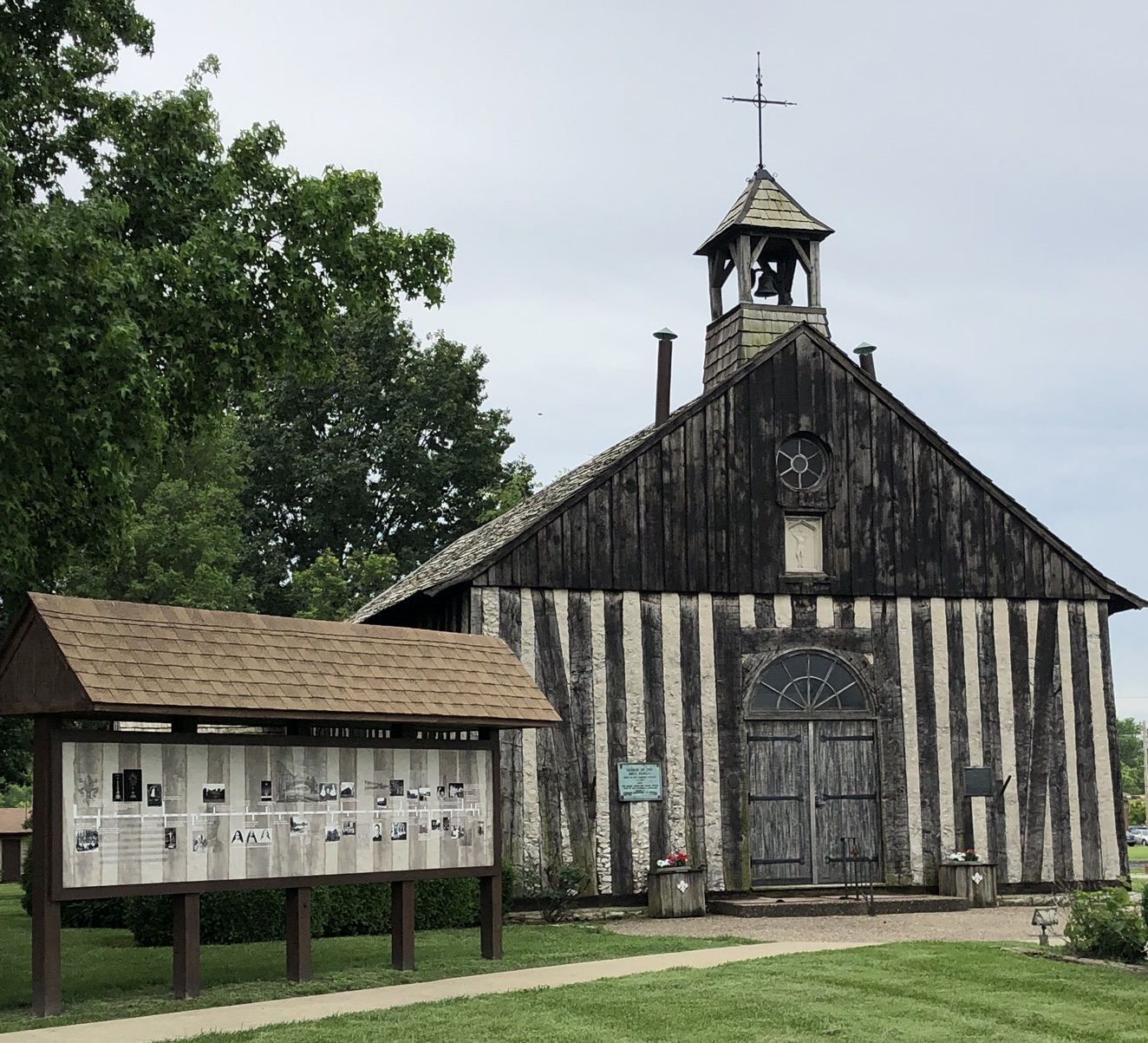 The Church was constructed in the characteristic post-on-sill technique of the French heritage and that church is still standing in Cahokia. It is the longest continuous Roman Catholic community in the United States.

Today two other important buildings also remain in Cahokia: the Old Cahokia Courthouse and the Nicholas Jarrot Mansion. Use the story map to see all three locations:  https://arcg.is/0e8GzS 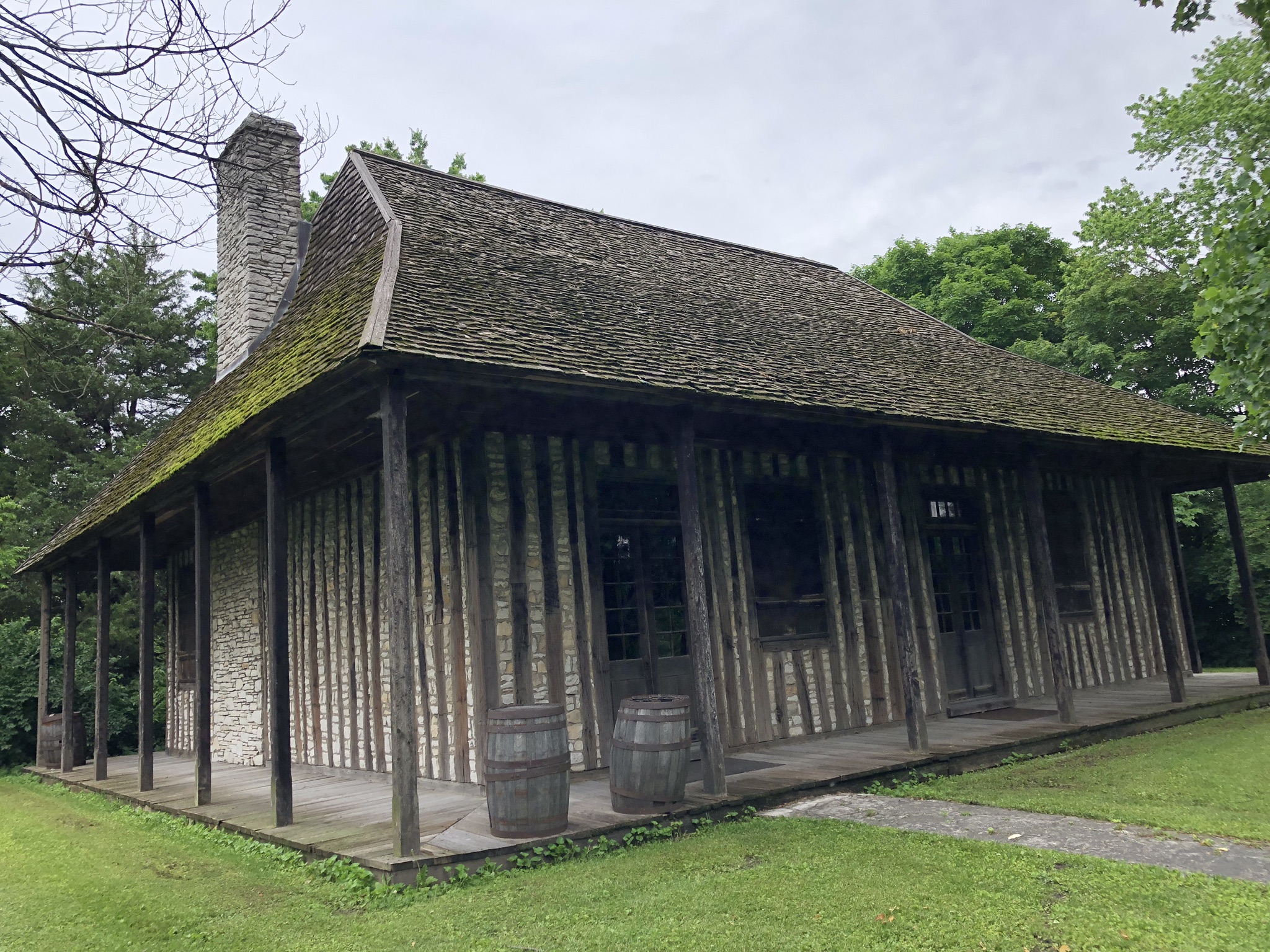 Old Cahokia Courthouse. This building, as is evident from its architecture, was originally a French dwelling. It was constructed as such ca. 1740 (and thus before the Church of the Holy Family). After the Illinois territory was acquired by the British as an outcome of the French and Indian War (1754-1763), the British then lost that territory to the new United States. As such, in 1793 the originally French dwelling became a courthouse and center of activity concerned with the Northwest Territory. Its greatest claim to fame is probably its association with the Lewis and Clark expedition. Between December 1803 until May 1804 they used the courthouse as the base from which to collect information pertinent to the upcoming Corps of Discovery exploration, to meet with a wide range of people, to accumulate supplies, to maintain contact with Camp DuBois (the winter camp) and as the address from which correspondence was maintained with President Thomas Jefferson (the building was also an official U.S. post office). There is an outstanding interpretive center inside the building. It is managed by the National Park Service as part of the Lewis and Clark National Historic Trail. 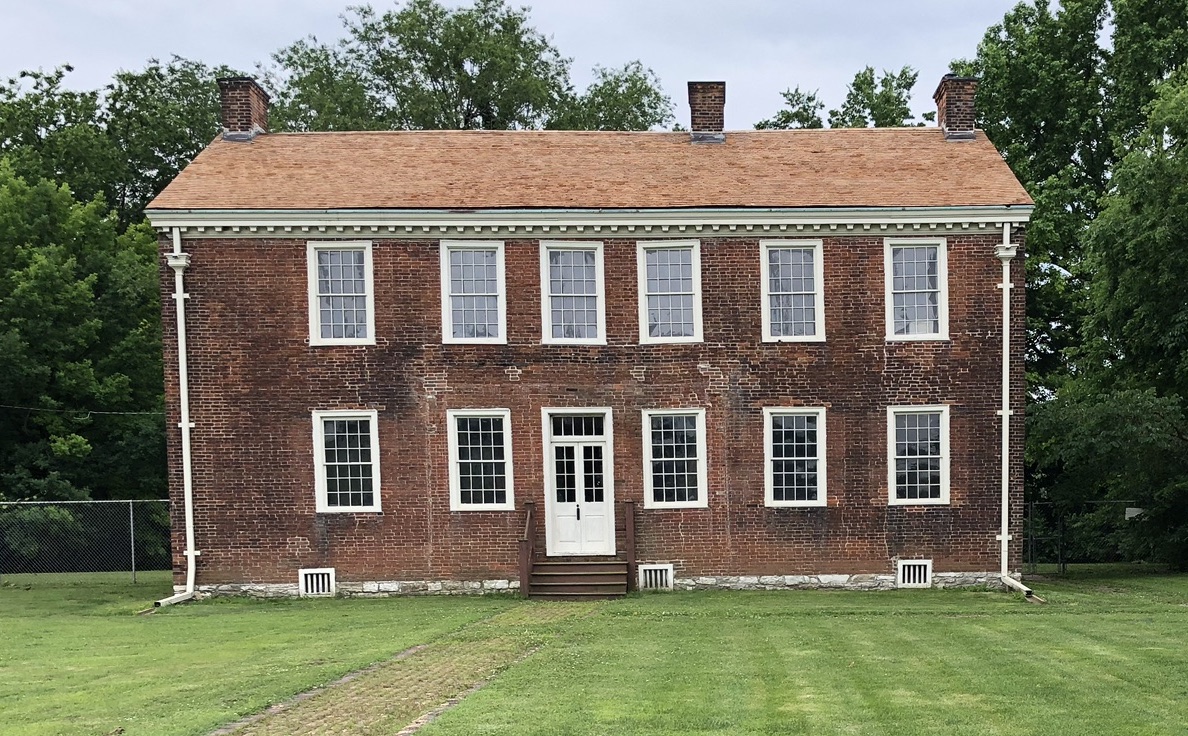 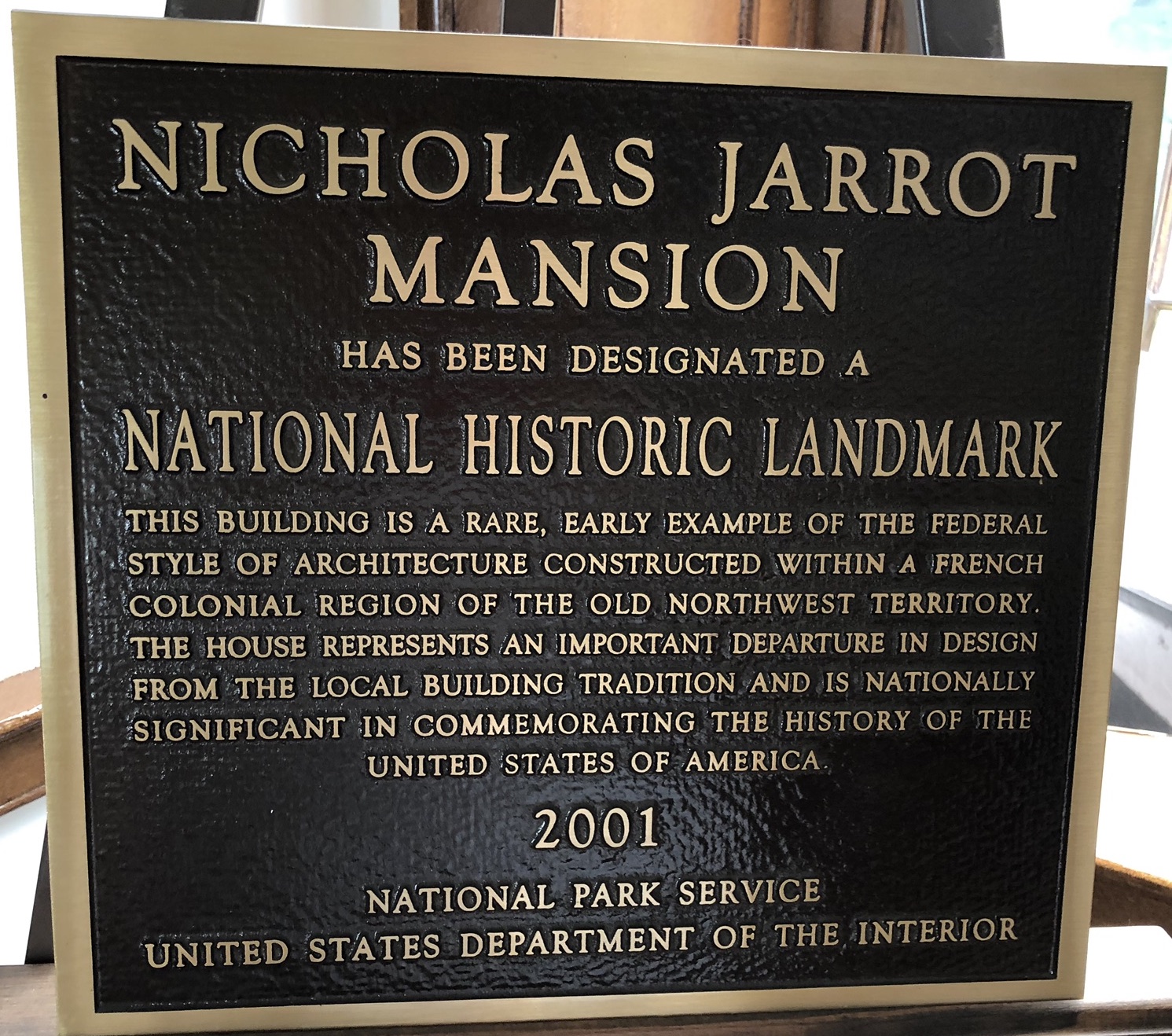 Nicholas Jarrot was an important French citizen living in Cahokia, a frontier town at the time. Lewis and Clark met him in Cahokia and it was he who let their men camp on the du Bois River (across from the mouth of the Missouri River) in the winter preceding the expedition of discovery.  At the time of that encounter, Jarrot had not yet built the mansion. But he already was very wealthy as a landowner, land speculator, fur trader, lawyer, county judge – basically, he had his hand in everything happening for miles around Cahokia. The Historic Preservation Division of the Illinois Department of Natural Resources describes the Federal-style mansion this way: “a two-story brick structure with a full cellar. The first floor is composed of a central hall, flanked on each side by two rooms. The second floor contains a ballroom with attached drawing room, a stair hall, and two other rooms. … In 1974 the Jarrot Mansion was added to the National Register of Historic Places.” Jarrot was very pro-American and it has often been noted that he chose a Federal architecture for his home rather than the French Colonial style of the area.

We are pleased to offer an interview with Brad Winn, Site Superintendent of the Lewis and Clark State Historic Site in which he covers the sites and time periods discussed on this webpage – explaining French Cahokia, the Holy Family Church, the Cahokia Courthouse and Nicholas Jarrot and his dealings with Lewis and Clark following his role in the French Period. CLICK ON THE LINK: https://mediaspace.illinois.edu/media/t/1_egfk3izd 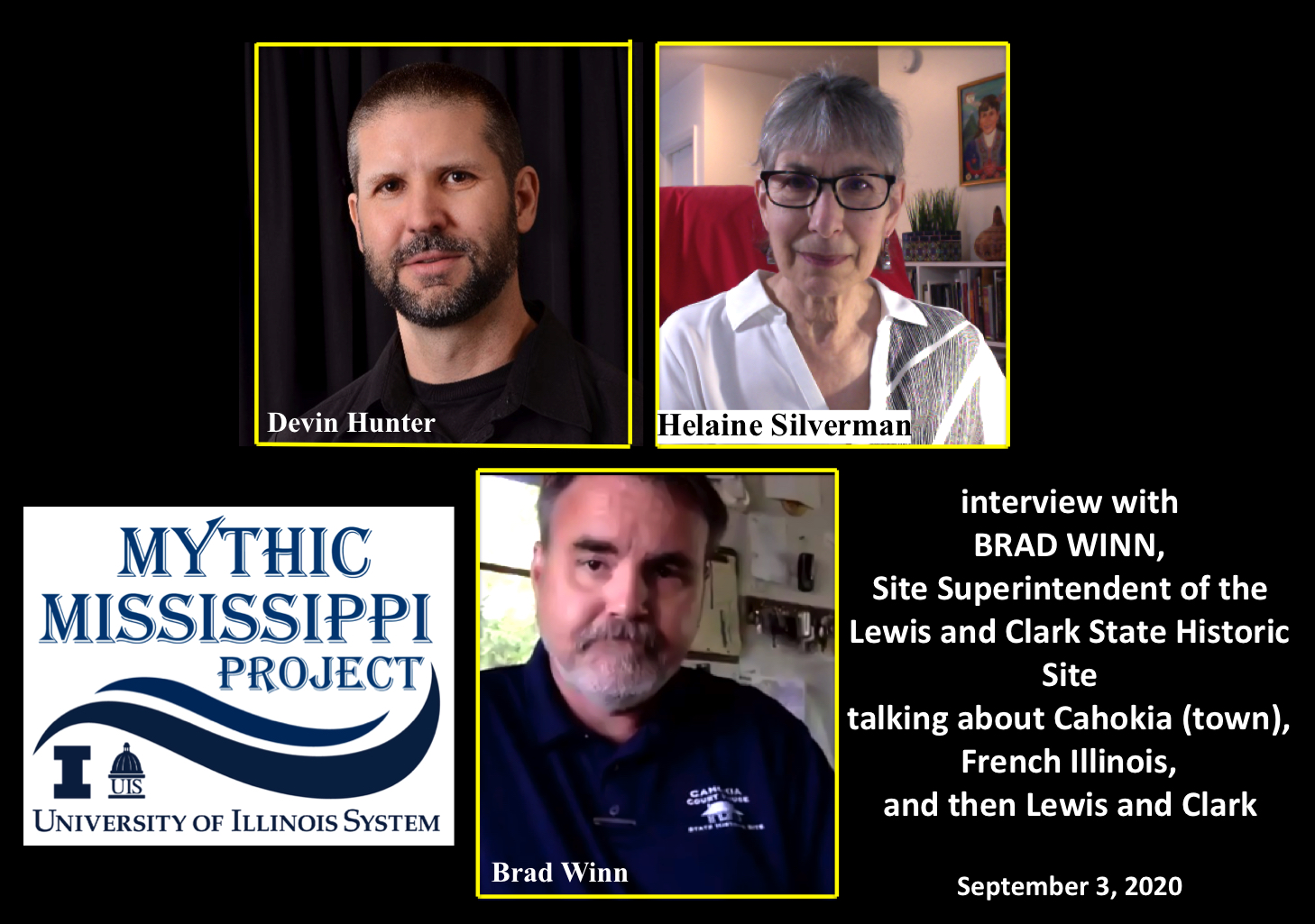 The seal of the contemporary city of Cahokia reflects its rich history: 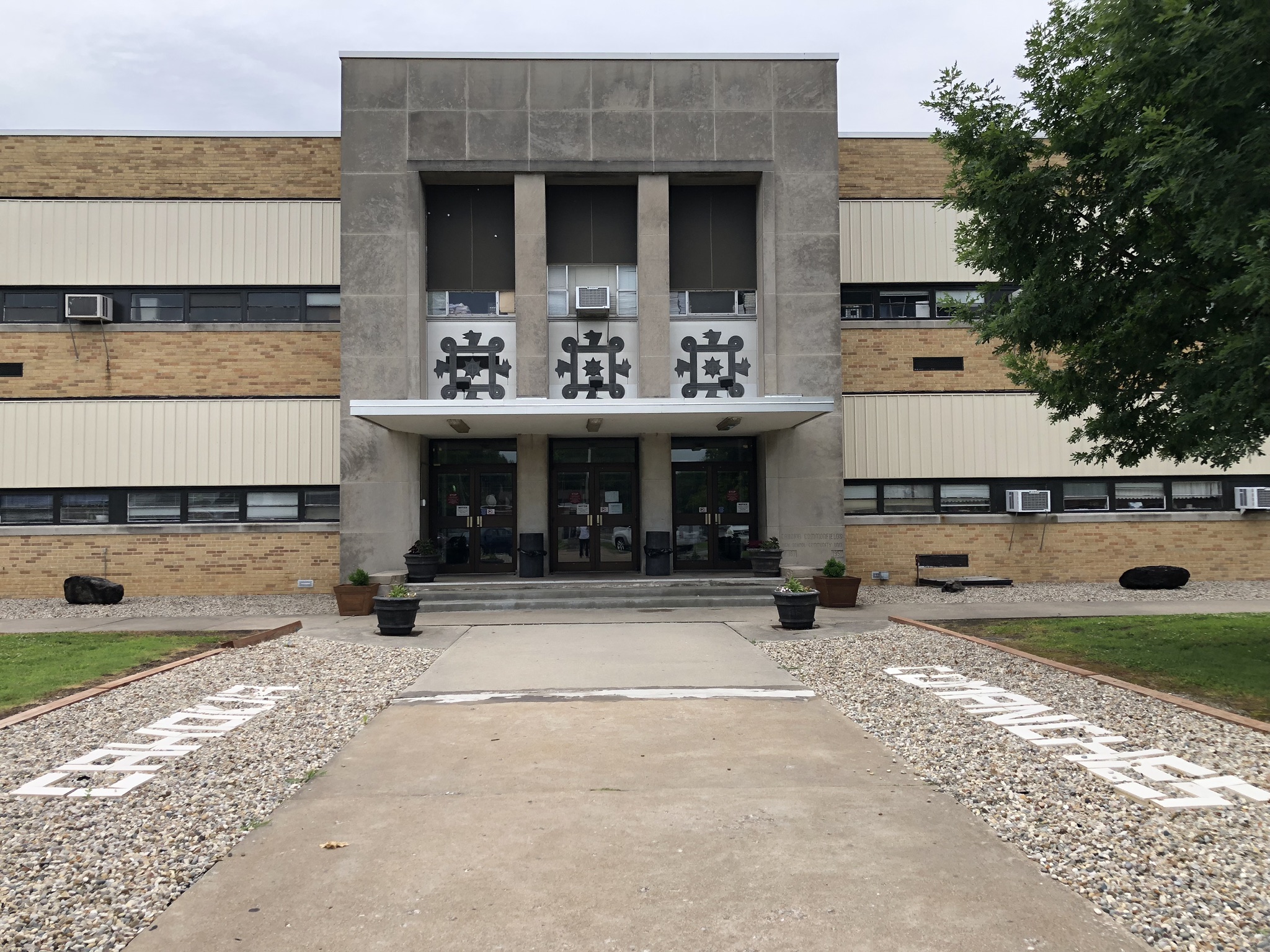 The choice of name by Cahokia High School is very interesting because the Indian profile head logo (see below) reveals an awareness of the nearby eponymous archaeological site, Cahokia Mounds. The Indian name chosen – Comanche – has no bearing on any Native American people who lived in Illinois being, instead, the name of an Indigenous people of the Great Plains. Moreover, at the college level and in U.S. professional sports Native American logos/names have disappeared or been called upon to disappear (most recently, the Washington Redskins:
https://www.nytimes.com/2020/07/13/sports/football/washington-redskins-new-name.html
The Mythic Mississippi Project is supported by the University of Illinois System and our university underwent a prolonged debate – indeed, a veritable battle – over the Chief Illiniwek mascot that for eighty years represented the University of Illinois in Big Ten sports events until “retired” in 2007 as a fundamental cultural appropriation and racist stereotype. It is obvious that “Comanche” is a cherished tradition at Cahokia High School. We think that the symbol offers a basis for a meaningful multi-pronged educational lesson and for that reason include it on this webpage. We are currently preparing a lesson plan that will be offered to the high school. 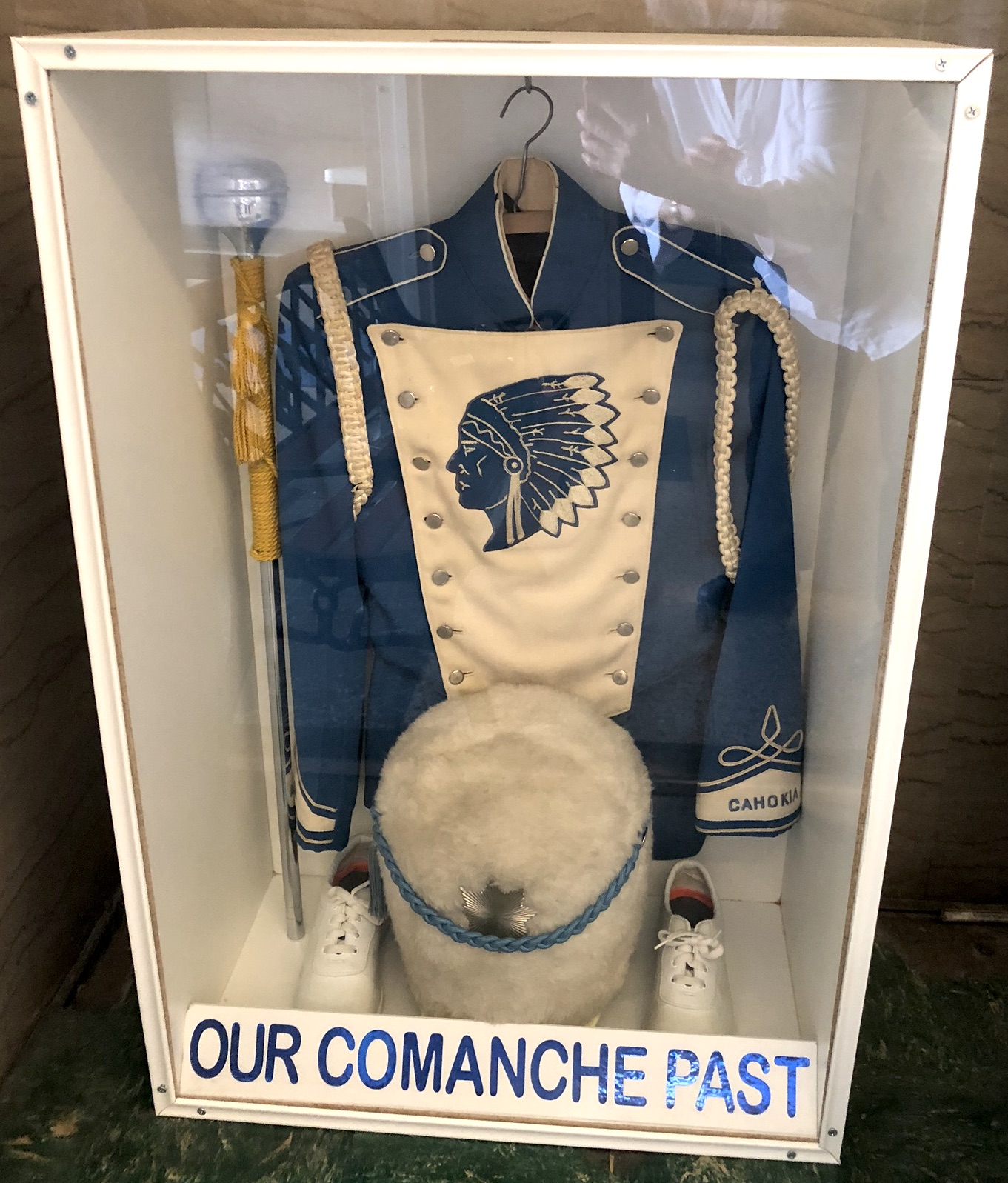