Maeystown was established in 1852 by German immigrants of the 1848 Movement, who left Germany for political and economic reasons. The Maeystown Germans were part of the major presence of Germans in southern Illinois. This German community has remained in the area for multiple generations. In Maeystown, for instance, we spoke with the great-great-grandson of Philip Heinrich Postel, a pioneer founder of Mascoutah, another German town, 40 miles to the northeast by driving. Maeystown was so German that German was the language on the street and it was the language of church services until 1943. 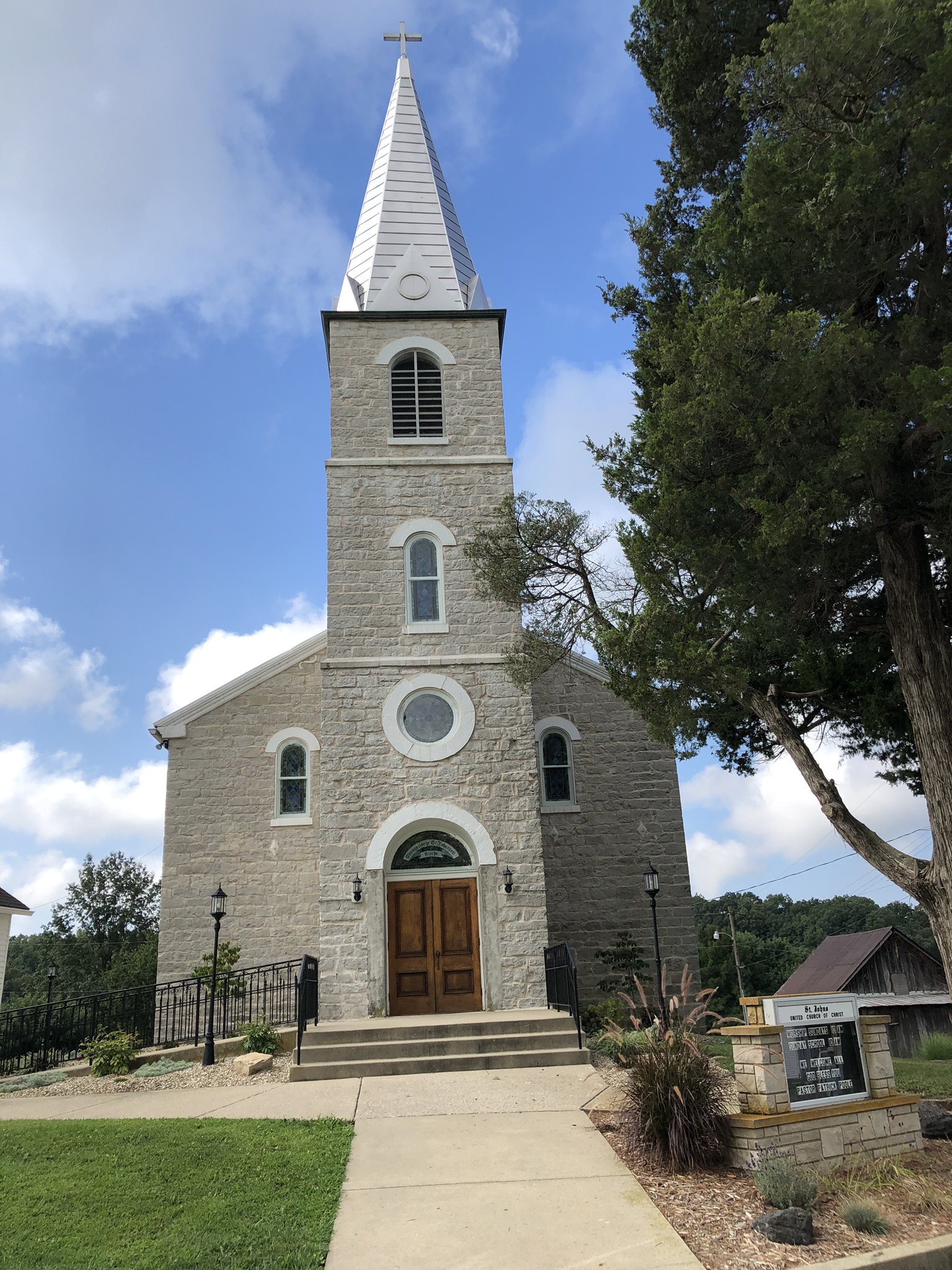 Maeystown remains a little architectural gem: a German town with stone walled buildings (below), almost all of which date from the 1850s to about 1910. Watch this “Illinois Adventure” (#1601) for an excellent video tour of the town: https://www.youtube.com/watch?v=J4FBq5fqIuY 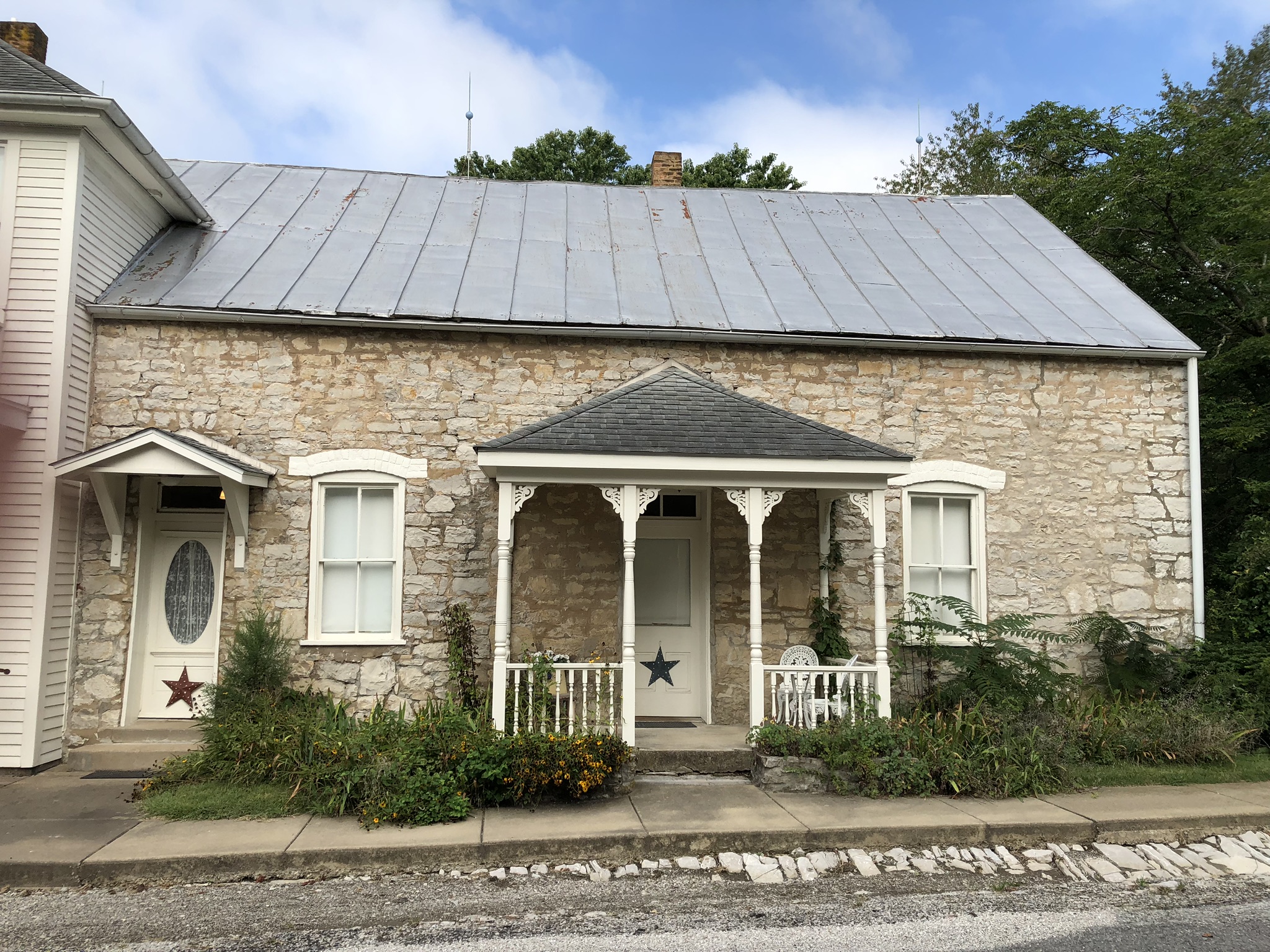 Another unique feature of Maeystown is that it has the longest stretch (400 ft) of stone gutter in the United States. The limestone pavers are inserted vertically, deep below the surface, accounting for their stability over some one hundred and fifty years! 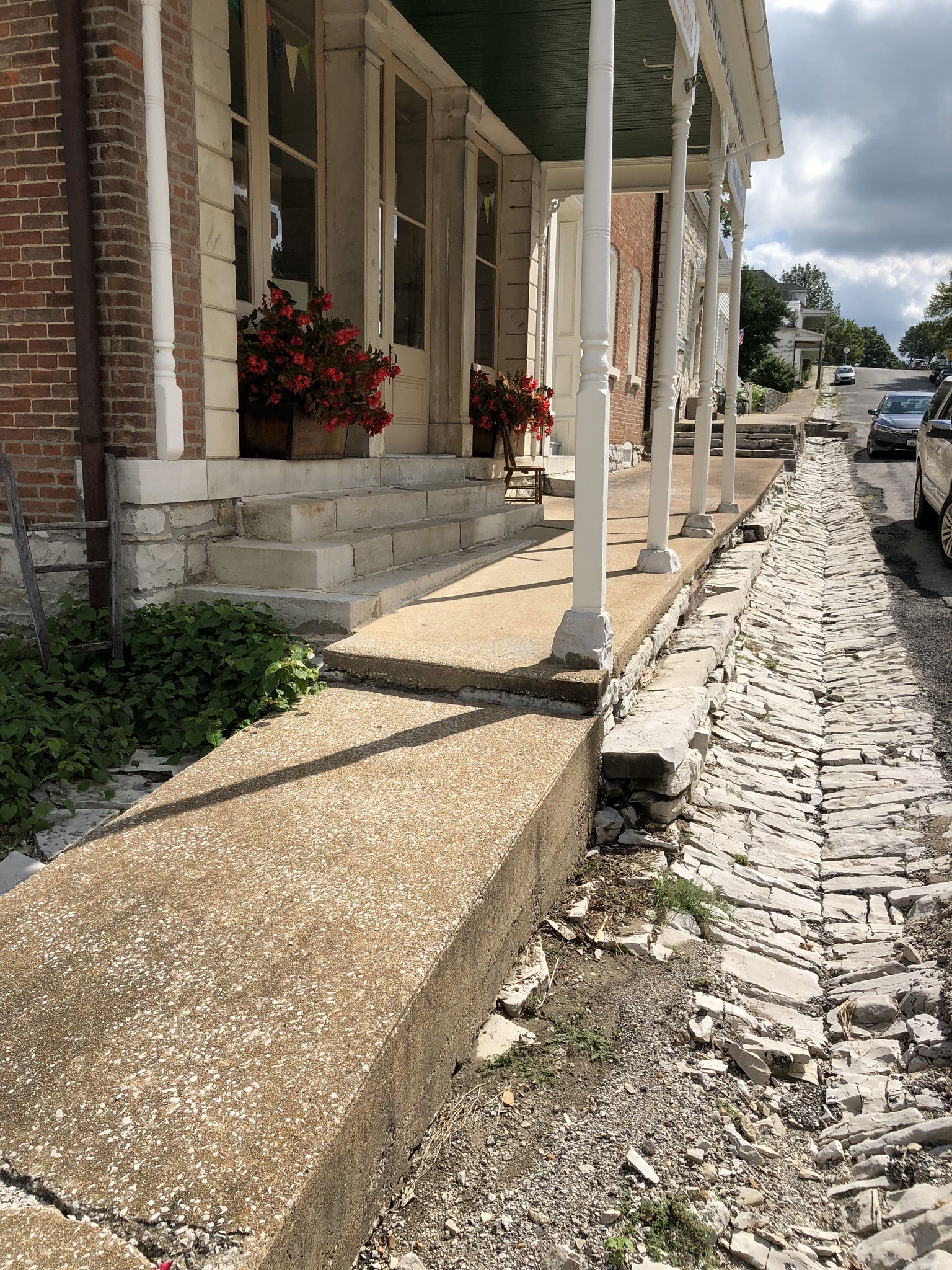 There is an active group of residents (including second-home owners) who are deeply engaged with the historic preservation of Maeystown. The Village Board helps in this effort. The architecture itself of Maeystown makes it a “place” – it has a very place-based identity visually and environmentally (in terms of its setting along a lovely creek). Its stone bridge is iconic (below). Maeystown is inscribed (1978) on the National Register of HIstoric Places as a historic district. It is one of the best preserved historic towns in Illinois. 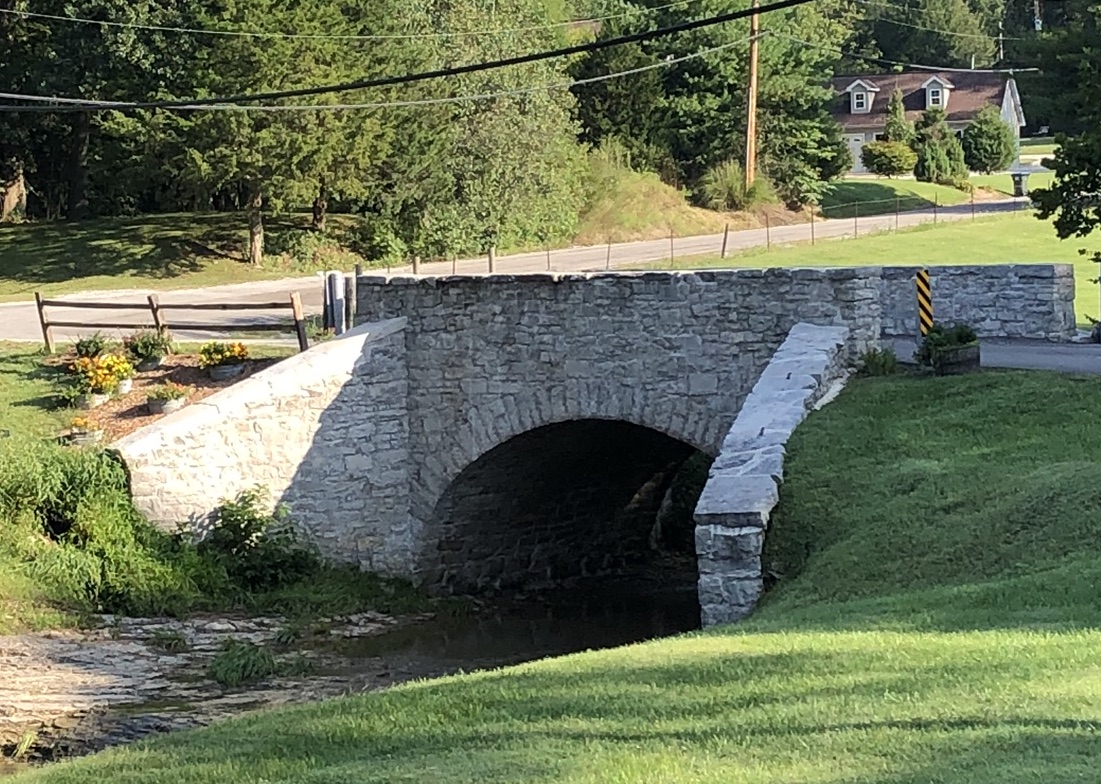 In September 2019 a leading citizen/businessman of Maeystown told us that thirty years ago Maeystown was a “ghost town.” Houses were falling apart. Windows were broken. Stone walls were in poor condition. But he was so enchanted with what he saw that he purchased four pieces of property. Friends of his shared his vision and bought up most of the rest of the town. Their goal was to implement accurate restoration so as to keep Maeystown the way it long has been: an architecturally intact German town. They have changed nothing other than to do necessary repairs.

Having secured the physical fabric (the tangible heritage), the group then dedicated itself to the creation of an intangible heritage in Maeystown with three traditional German festivals: an Oktoberfest, an Apple Butter Festival (there were plums in the part of Germany from whence the immigrants came, but here they had to switch to making apple butter in the absence of plums) and an Old-Fashioned German Christmas Festival replete with caroling in German and accompanied by a Taste of German Christmas. The festivals bring in large numbers of regional tourists.

The Apple Butter Festival is particularly costly and time-expensive but as the organizers say, “we do this with the purpose of keeping the traditions alive. But it has other benefits. People come and get to know each other and get to know us and what we’re doing here.” The latter is part of the tourism strategy. Also, the organizers talk to people and learn about them and who might wish to purchase a house in Maeystown – the goal being to encourage new villagers who share the historic preservation vision of the recent founders and thus are committed to maintaining the architectural integrity of the town.

Maeystown has an excellent local history museum, created by the Preservation Society of the town. It is located in the Old Mill. 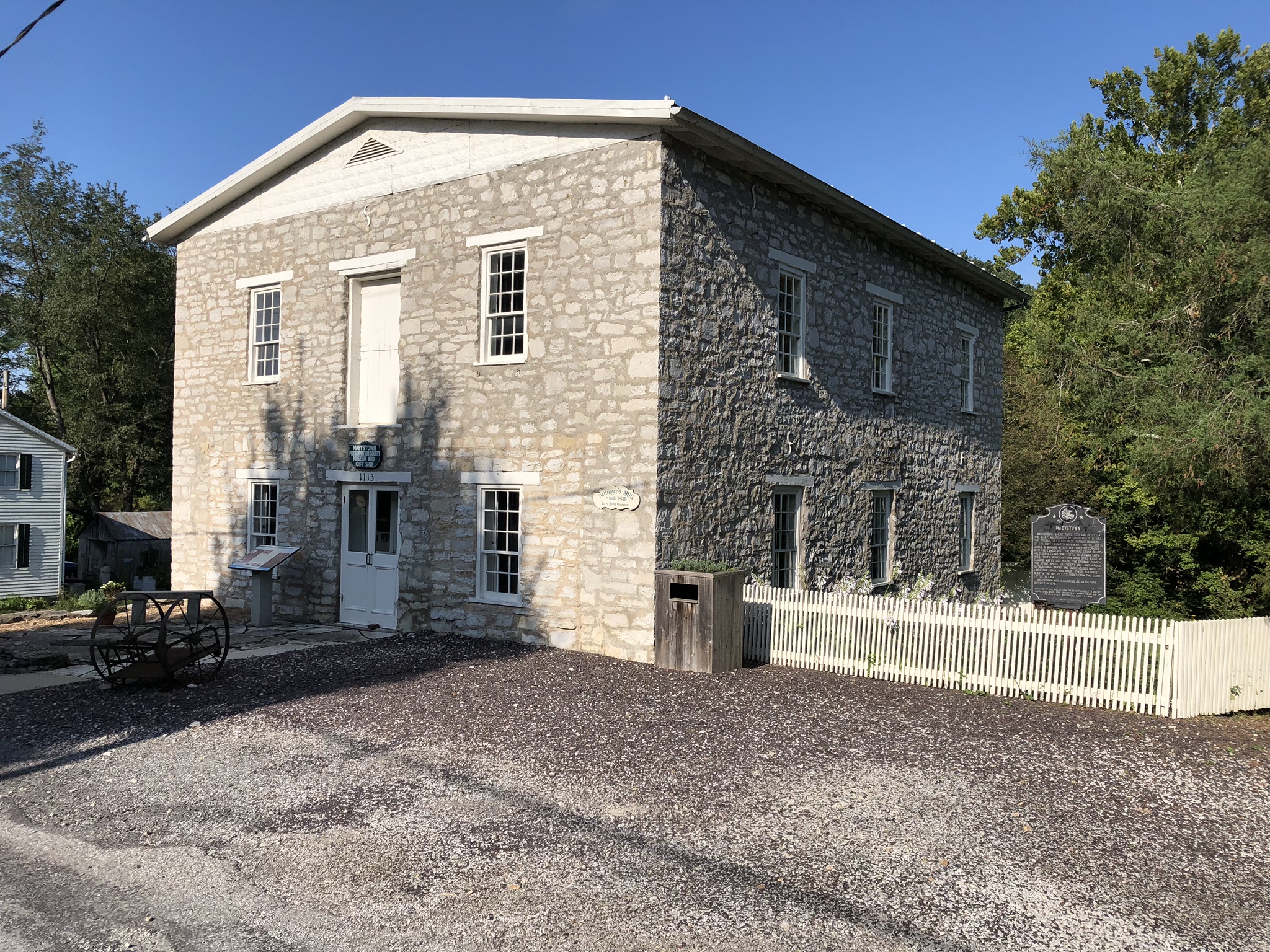 The original post office in the 1850s and 1860s – a stonewalled edifice like others in Maeystown – is no longer standing but was located on one lot of what today is a vacant double lot of land (below). [Note 1] Historical photographs of it are held in the Maeystown archive. We propose to send a University of Illinois team of archaeologists to test the site to see if it has value for excavation. 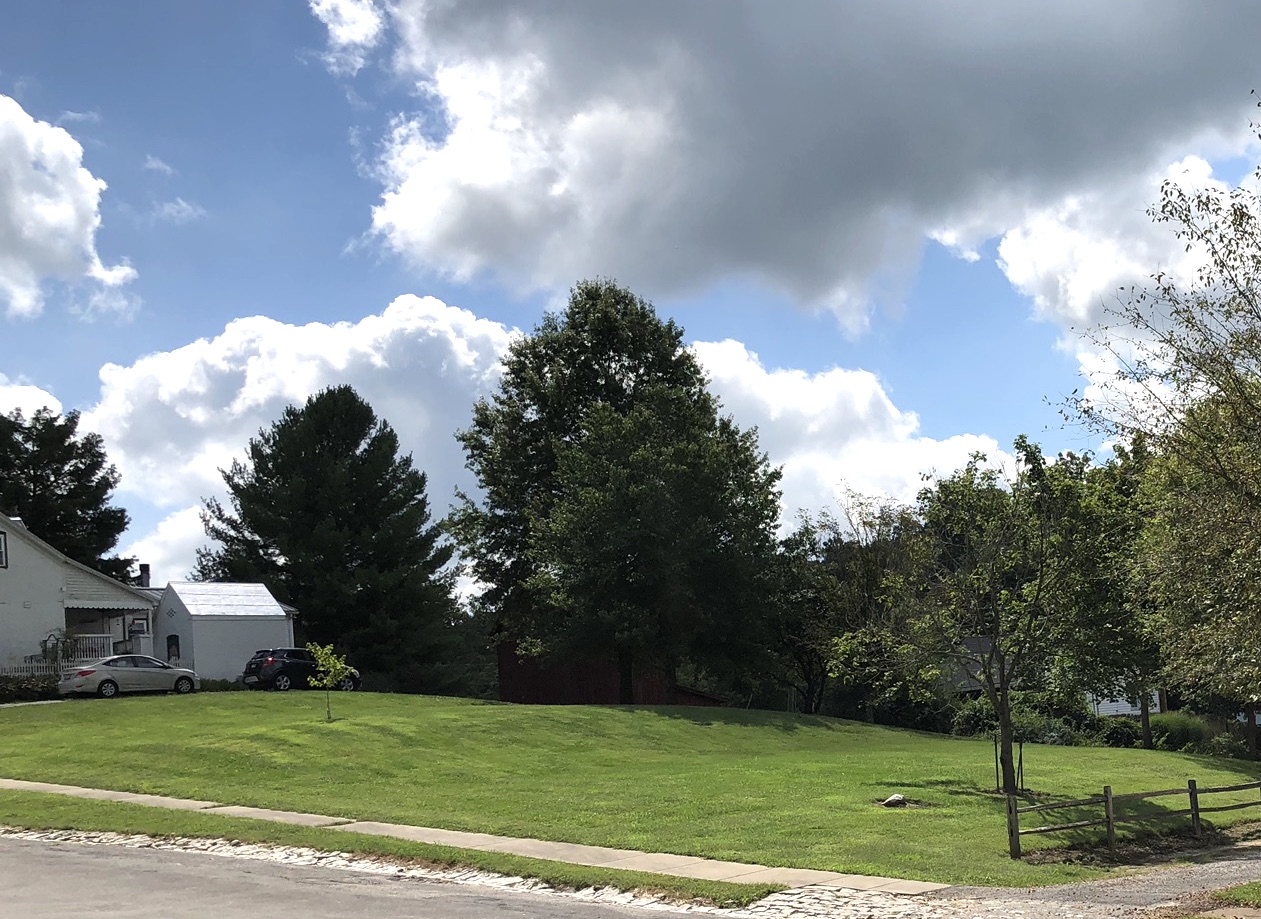 Another potential historical fact, to be corroborated, is that William Rogers Clark camped at the mouth of the Old Maeystown Creek where it joins the Mississippi, en route to meeting Meriwether Lewis at Wood River. 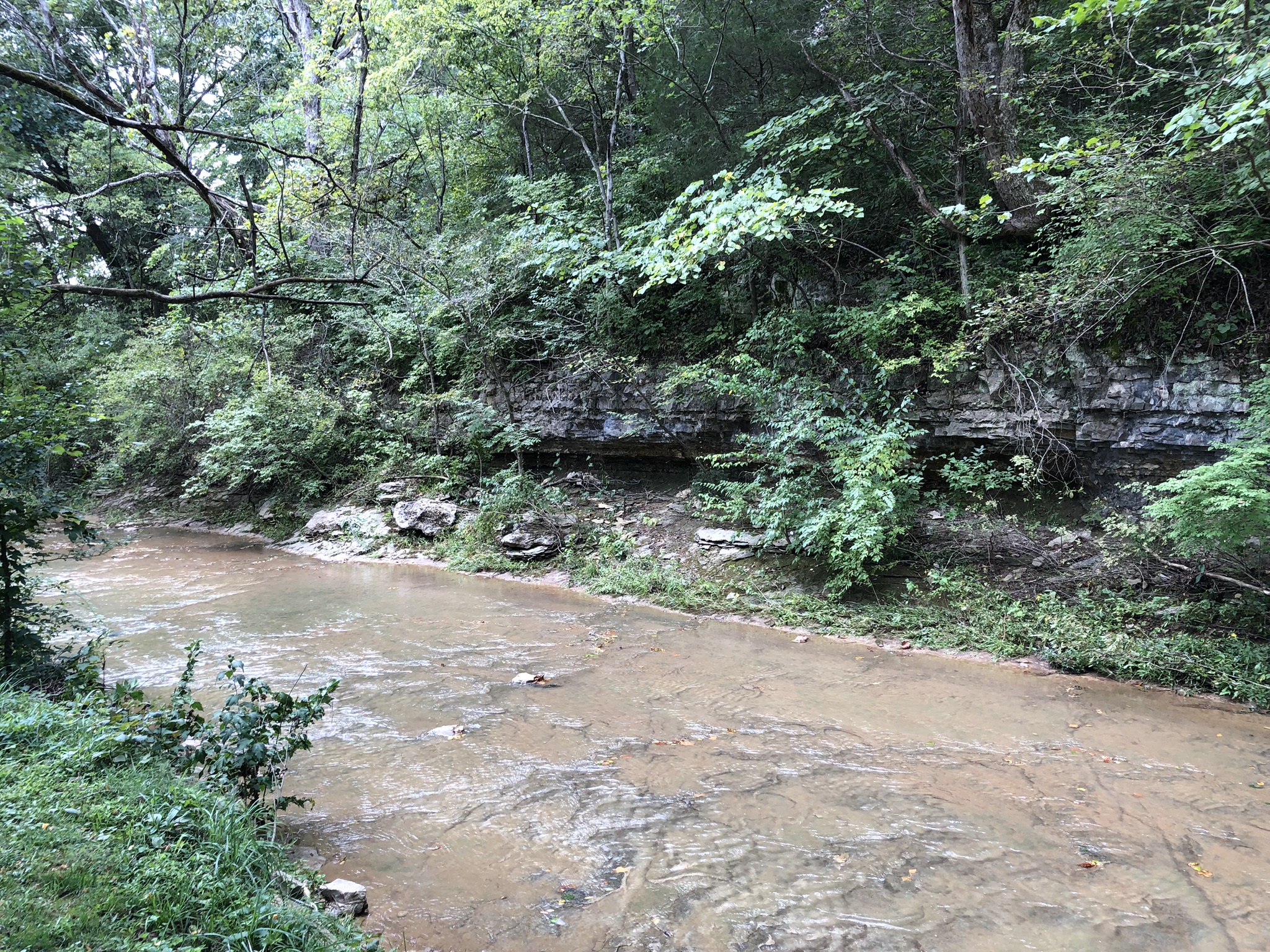