Historically, Warsaw is significant because in the 1840s it became a center of virulent opposition to the Mormons who had settled in Nauvoo, 17 miles to the north (they had originally tried to settle just south of Warsaw but there was so much opposition from Warsaw that they gave up on that plan). The Warsaw Signal newspaper, published in Warsaw, led a media campaign against the Mormon settlement in Nauvoo. Indeed, a local newspaper at the time decried the new religion and its adherents. This was a proximal cause of the murders of the Mormon leader, Joseph Smith, and his brother Hyrum, in 1844, while they were being held in the nearby Carthage jail. Five of nine men who murdered the Smiths in Carthage were from Warsaw. 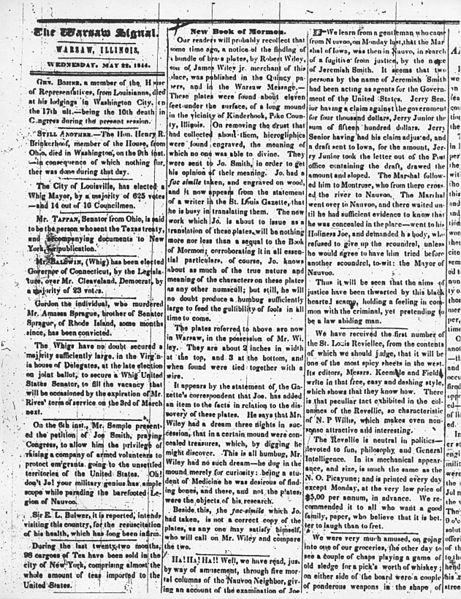 An interesting historical interpretation of Warsaw at that time has been advanced by Brian J. Stutzman in his book The History of Warsaw Illinois. Including the Mormon Period, 2nd edition (2018). A summary of the book with an embedded video is available here:
https://wheatandtares.org/2019/08/12/anti-mormon-triangle-carthage-nauvoo-warsaw/
and: https://www.youtube.com/watch?v=xznbuBCfGaA

Interestingly, today, Warsaw’s official municipal website advertises Warsaw this way: “Warsaw-Nauvoo tourism is bustling and we welcome our out-of-town guests” (read: Mormon visitors). This is a fascinating situation of a dark heritage being claimed for redemption and deployed for economic gain.