Located just north of Alton, on a section of the dramatic limestone cliff face in this most scenic part of the Great River Road, is the “mysterious” Piasa. It was aboriginal when seen and recorded by Marquette and Joliet during their 1673 voyage down the MIssissippi River. Two French drawings of the Piasa dating from early French explorations exist. Unfortunately, quarrying of the  bluff  in the 1850s destroyed that image. There is a lot of mythology about the Piasa/Piasa Bird.

The Mythic Mississippi Project is tremendously grateful to Dr. Mark J. Wagner (Director, Center for Archaeological Investigations and Professor, Department of Anthropology, Southern Illinois University at Carbondale) for the information he provides below about the Piasa. 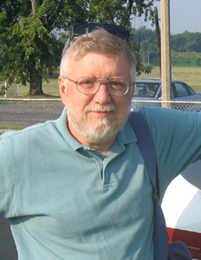 There are two 17th century French drawings of the Piasa. These two images plus the first written description from Marquette and Joliet’s voyage down the Mississippi in 1673 are where history begins and ends. 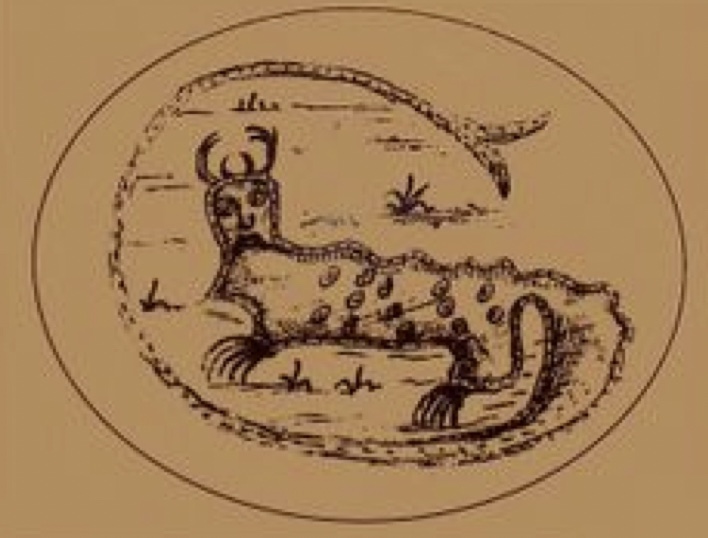 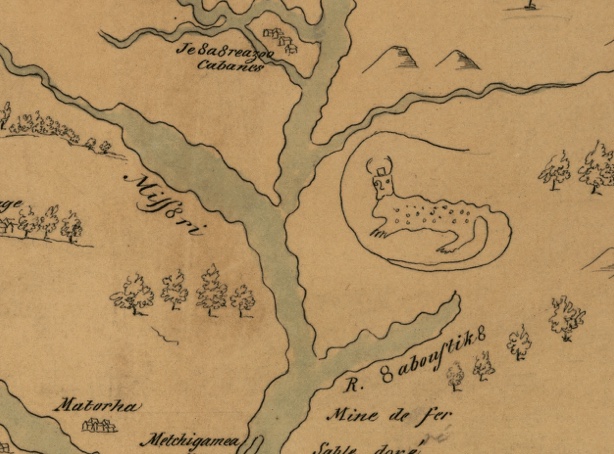 However, even though the makers of the Piasa did not leave written testimony, the fields of archaeology, ethnohistory, ethnography and art history enable a plausible interpretation of what the image represented to its makers and how old it was when seen by Marquette and Joliet.

The location of the Piasa is significant (see 1682 map). It was located at the confluence of the Mississippi and Illinois Rivers, which was a very dangerous area because of the rapids and swift currents at that location.

Dr. Wagner believes that the Piasa painting probably dated to the Mississippian period (AD 1000-1500) and represented a mythical spirit being that incorporated elements of at least two worlds, probably three.

The 1678 painting shows it as having a long serpent like or fish tail, that links it to the Underworld, which is a place of confusion and danger. The spotted panther- like body and antlered head link it to This World, on which humans live. Various accounts of it from the early 1800s also say that it had wings, but that they were not always visible. Wings would link it to the Upper World where winged mythical beings live.

The combining of all three worlds–Under, Upper, and This–in a single image made the Piasa a very powerful being that crossed the three worlds of the Native American cosmos.

The Piasa was believed to live in caves or springs, which represented entrances to the Underworld. Dangerous rapids such as those at the confluence of the Illinois and Mississippi Rivers also would have been viewed as the habitat of Piasa creatures.

The Piasa was not evil but was dangerous because it possessed so much spiritual power. Marquette recorded in his journal that his Illini Indian canoe paddlers knew this painting was coming up and were frightened of it. They may have left offerings to it to get through the rapids without danger as did the later Illini paddlers of another French missionary, Father de St. Cosme. By leaving offerings to it, not only could you protect yourself but you could also obtain some of its power for yourself, which (if you were a warrior) you could carry into battle with you.

The proposal of a Mississippian Culture age (AD 1000-1500) is based on knowledge that Native Americans believed in a three-tiered cosmos and in powerful spirit beings such as the Piasa. These beliefs extended back in time to at least the Mississippian period.

In addition, a fascinating presentation (January 15, 2015) on the Piasa Bird can be watched here, presented by Dr. Duane Esarey, former Assistant Director of the Illinois State Archaeological Survey and current Director of Dickson Mounds Museum.

Prehistoric Native American paintings were made of natural materials such as iron oxides. These fade with age but do not go away. There are numerous prehistoric paintings still extant in Illinois. A pre-contact painting such as the Piasa made in the 12th or 13th century by Mississippian peoples could easily have endured into the late 1600s. 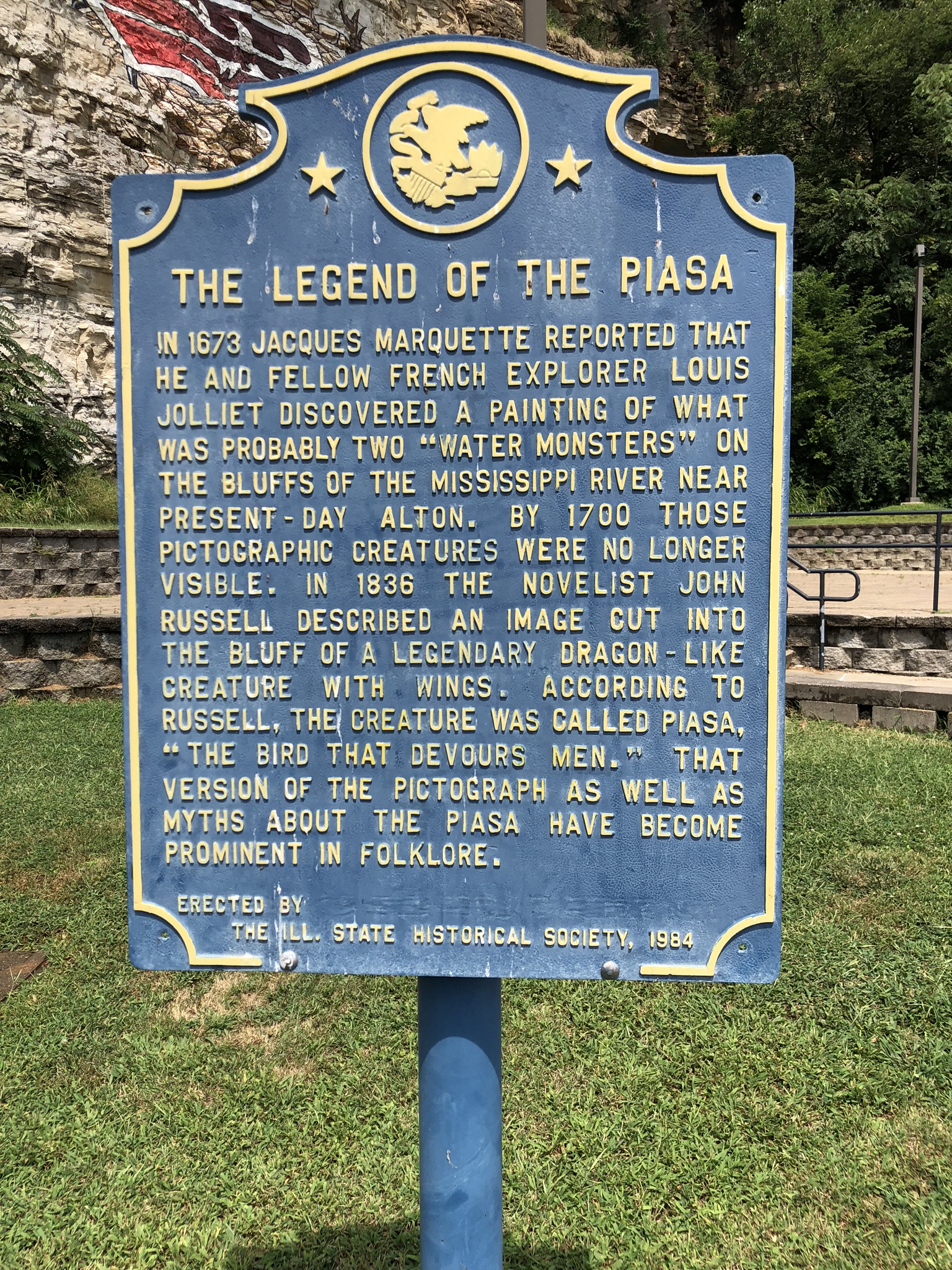 Plaque erected by the Illinois State Historical Society in 1984 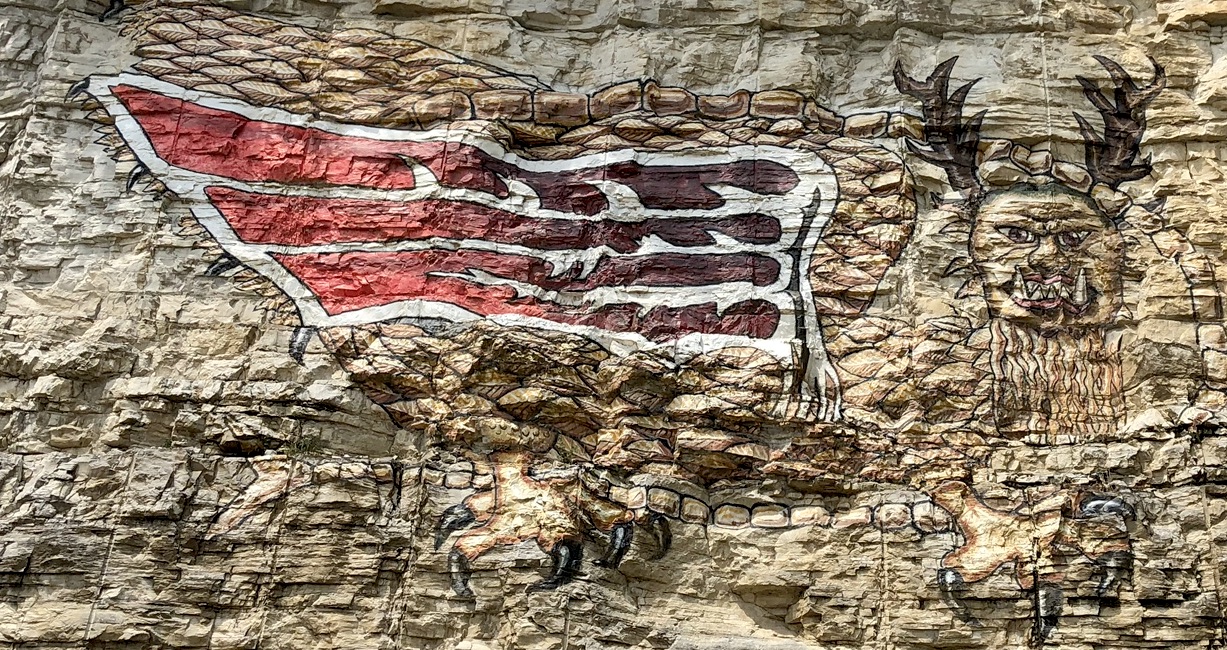 Helaine Silverman’s photograph of the painted figure of the Piasa today. 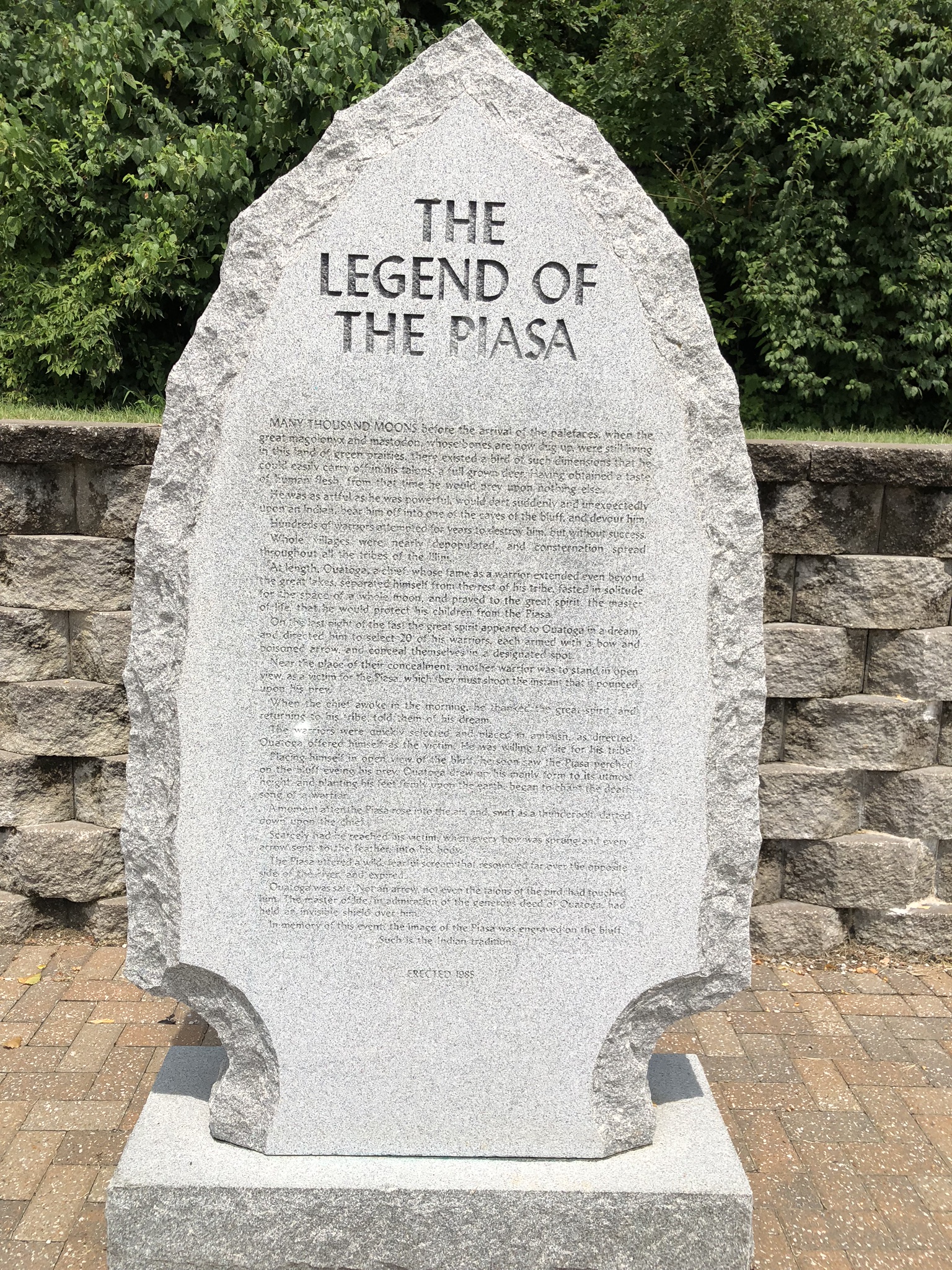 Legend of the Piasa recounted in the public parking and recreation area of the Piasa today. Note that the text is inscribed on a granite projectile point-shaped marker.