Benld is a fascinating former coal town, most especially because of its manifestly close connection to the immigration story of its miners. Italians, Croats, Russians and other Europeans came to Benld to mine for opportunity (literally). Indeed, into the 1950s Italian was commonly spoken on the street and we have been told that most of the Italian population was from northern Italy. The immigrant presence is still seen on the Benld landscape: its churches, parks (that still have Croatian and Italian pavilions), restaurants (such as Fema’s and Amore), named buildings (such as the library shown in the banner on this page), businesses (such as Fassero), street names (such as Saracco Drive), house styles and ethnic civic associations (such as the Italian Club). Some of these hark back to the town’s founding in 1904 or soon thereafter. If one looks carefully, the multi-ethnic history of Benld can be “excavated.” 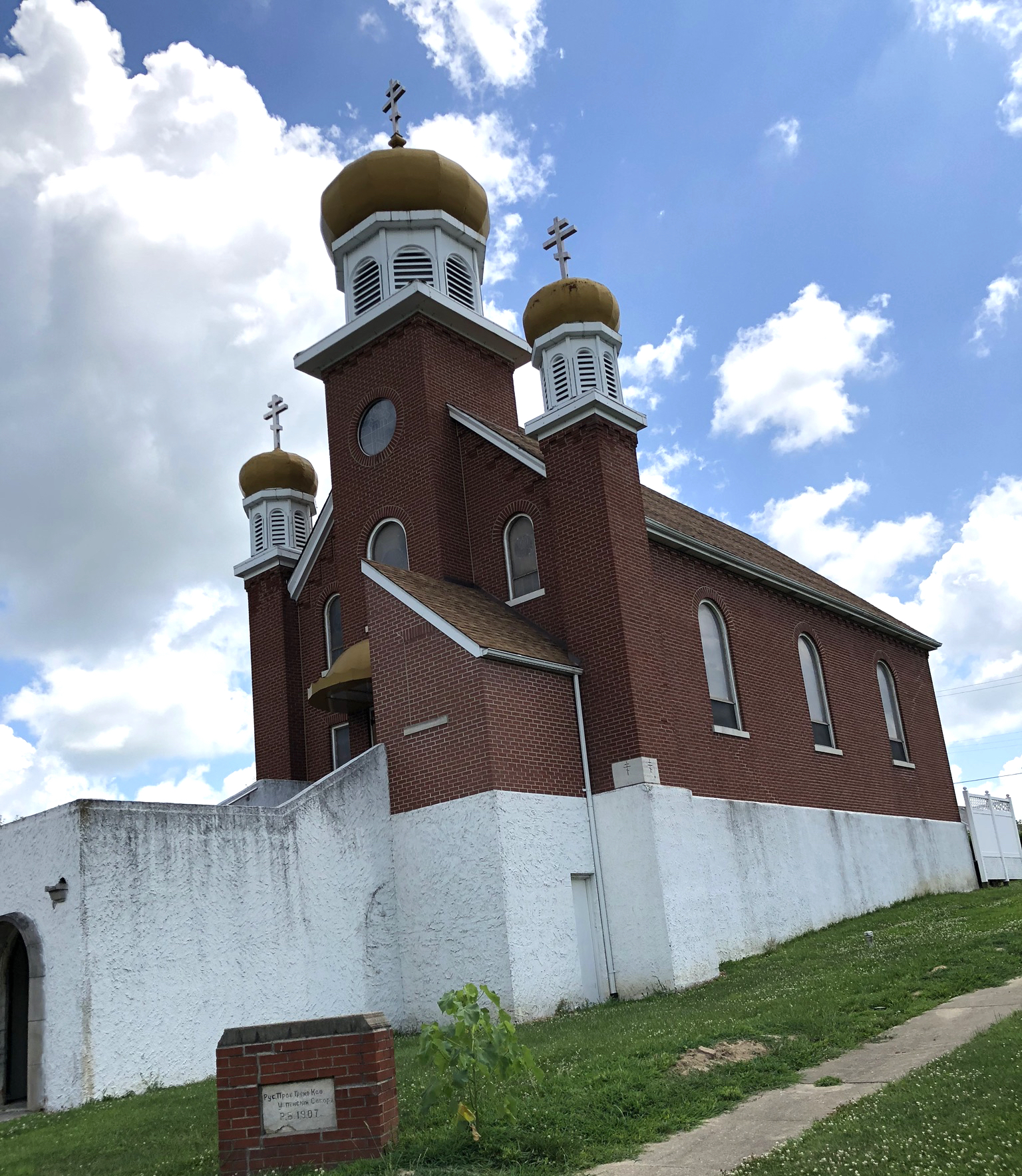 church of one of the immigrant groups

It is interesting that this is a Russian Orthodox Greek Catholic church.

One of the most interesting initiatives about Benld is “Miners, Mobsters and the Mother Road”, which links coal towns to the famous Route 66.  “Mobsters” refers to Benld because Al Capone hid a distillery under the fake “No. 5 Mine” and he moved liquor along Route 66. (There were four real coal mines: Superior No. 1 in Eagerville, Superior No. 2 in Sawyerville, Superior No. 3 in Mt Clare and Superior No. 4 in Staunton). 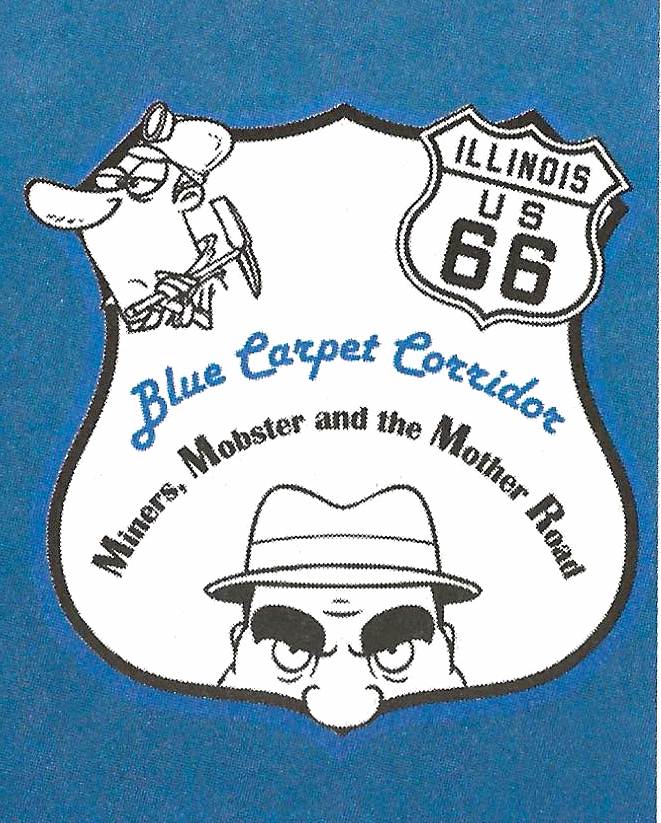 Entrepreneur Ken Snider has adopted that history as the name of his new winery/bar called “No. 5 Mine”. This is a brilliant deployment of a town’s heritage for economic development based on tourism.

Nor was Al Capone alone in producing liquor. Some houses had vats in their basements for crushing grapes – a tradition brought from the Italian homeland (we assume) and forced underground – so to speak – by Prohibition. (see the photo below). 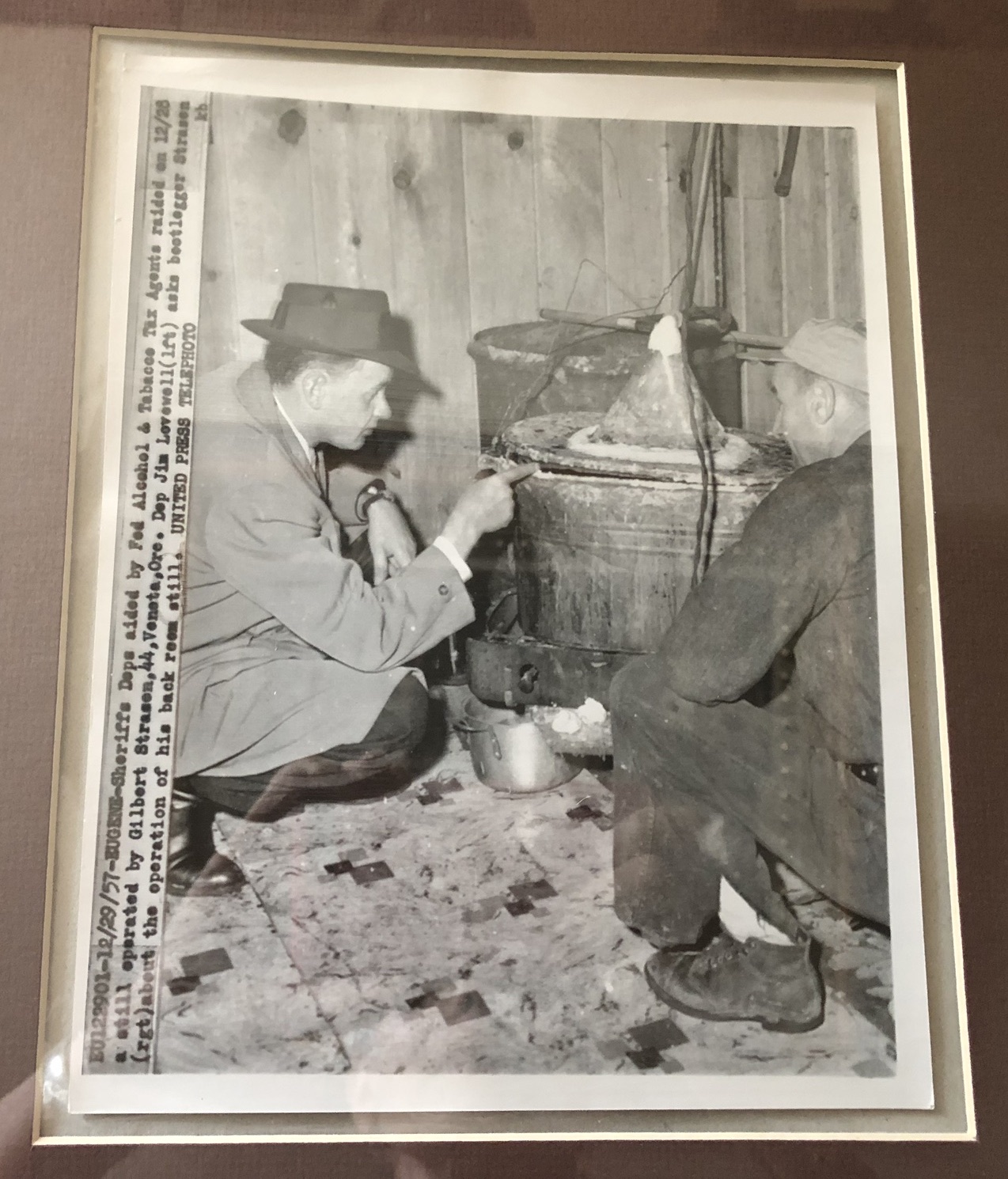 wall photo in Mine No. 5 Winery/Bar

In Mine No. 5 Winery/Bar, Mr. Snider has curated what is, essentially, an exhibition of aspects of Benld’s past, even of the building itself, which had been a packing facility (see photo below), by displaying old family photographs (donated by locals) on the long wall of the bar. 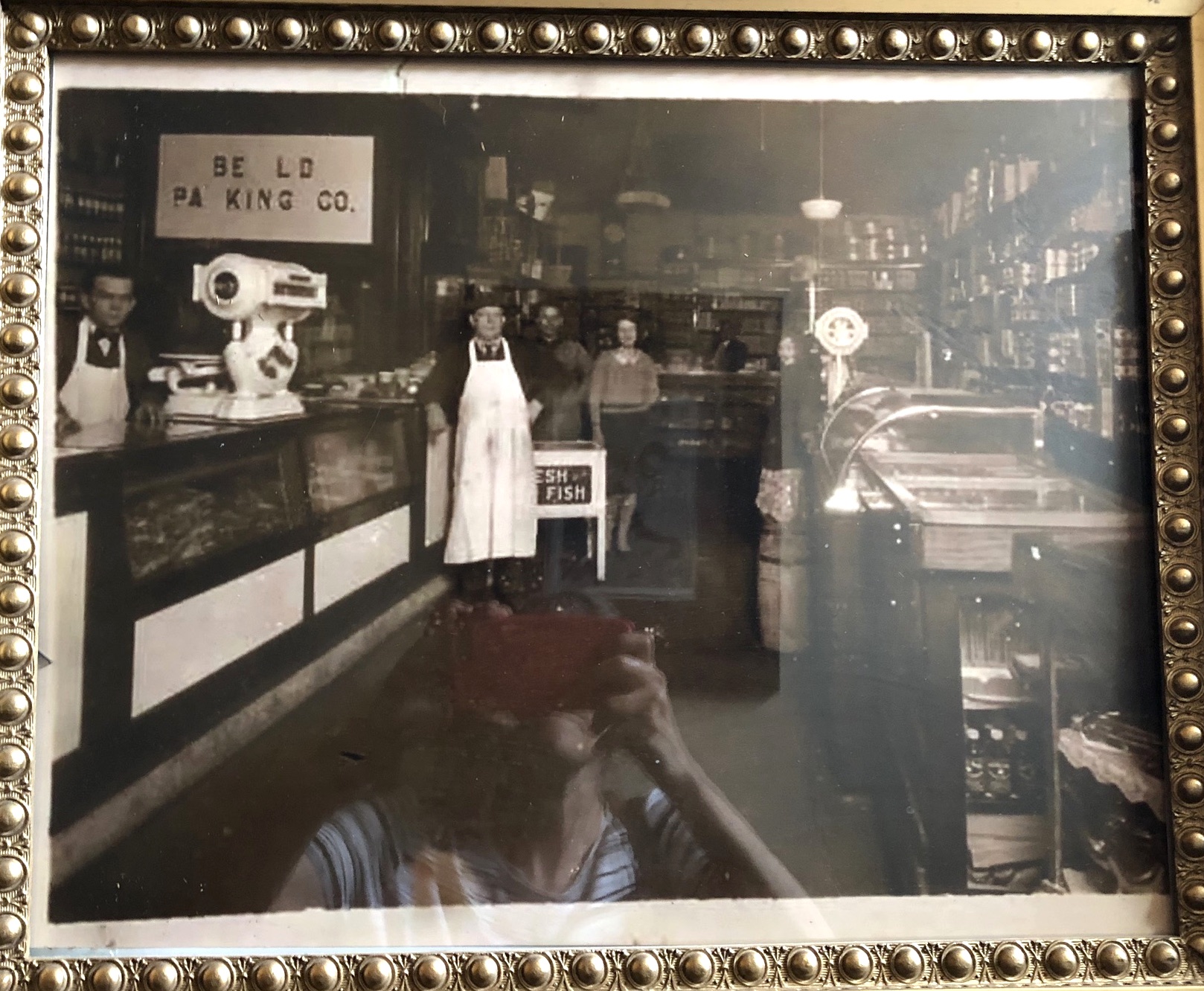 Right across the street is Capone’s Saloon and Pub. One can see the “Capone’s” plaque on the annulled original entrance (see below): it is spolia, in effect, from the previous owner’s use of the building as a bar for an older generation. We’ve heard that the current owner is going to remove the Capone’s plaque. We hope not, even though this bar makes no other reference that would situate it in the historic landscape of Benld. 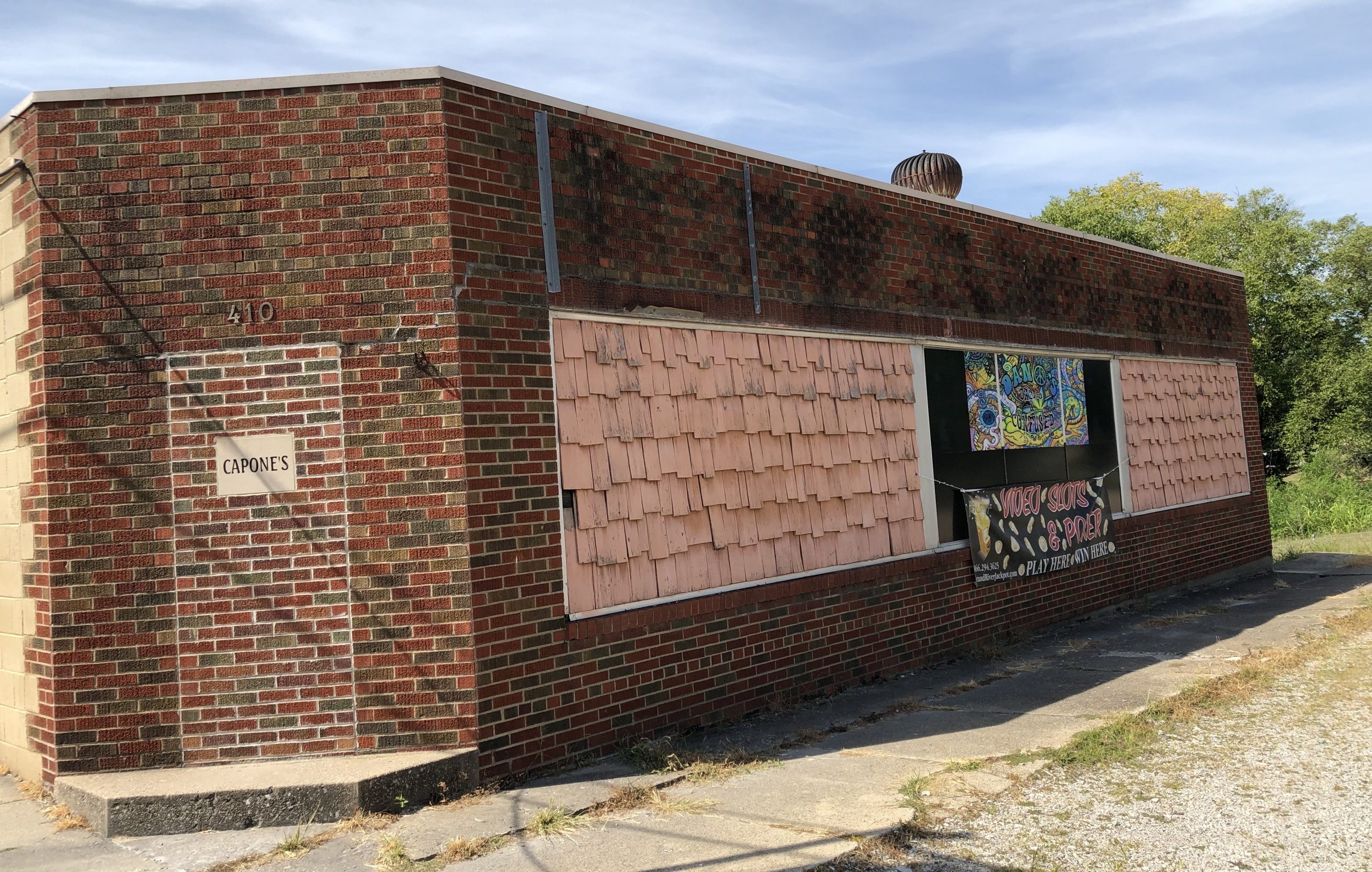 Sadly, Benld’s greatest attraction, the Coliseum Ballroom, was recently lost due to fire. Though no longer functioning as a renowned music and dance venue at the time of that loss, the Coliseum – converted to a shops – nevertheless remained a significant tourism destination in the macro-region because people recalled its glory days.

Moreover, Benld has erected a roadside display where the Coliseum used to be that is large enough and clever enough as to make one stop to look at it. 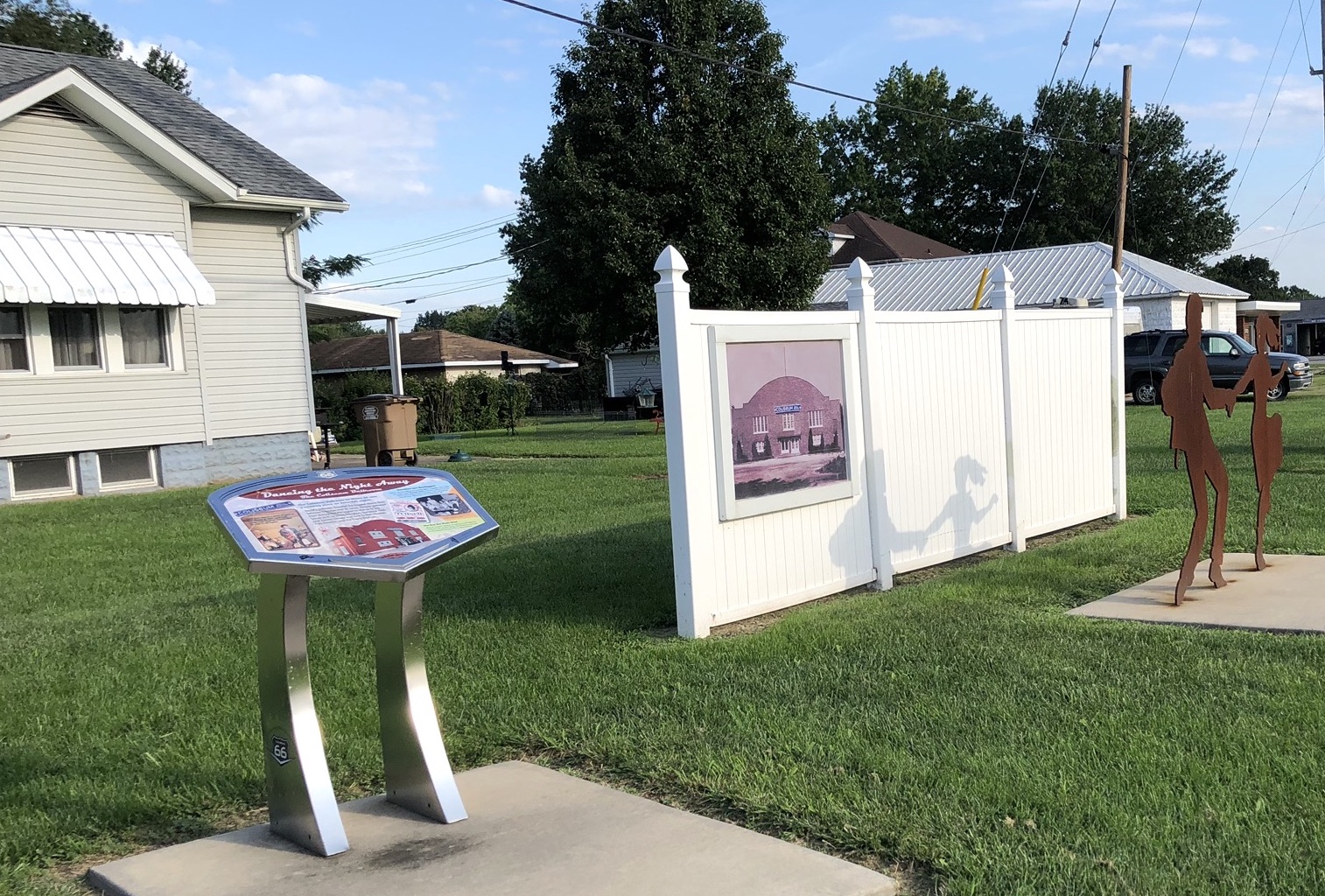 Today, a group of local citizens is seeking to remediate the town’s severe economic decline (due to the loss of mining and dramatic ground subsidence under many properties) through a program called Build Benld.

Our project would like to contribute to Build Benld’s effort by using materials in the Benld Public Library to create a wall exhibition there and we hope that a larger venue can be found in Benld for a little museum that will tell the town’s colorful history and its rich immigrant story. We also hope to direct an oral history project in Benld to recover the immigrant story from those who lived it, before it is too late. Moreover, this niche will complement the exhibition scripts of the Mother Jones Museum in Mt. Olive and the Coal Museum in Gillespie. The proximity of the three towns is advantageous. 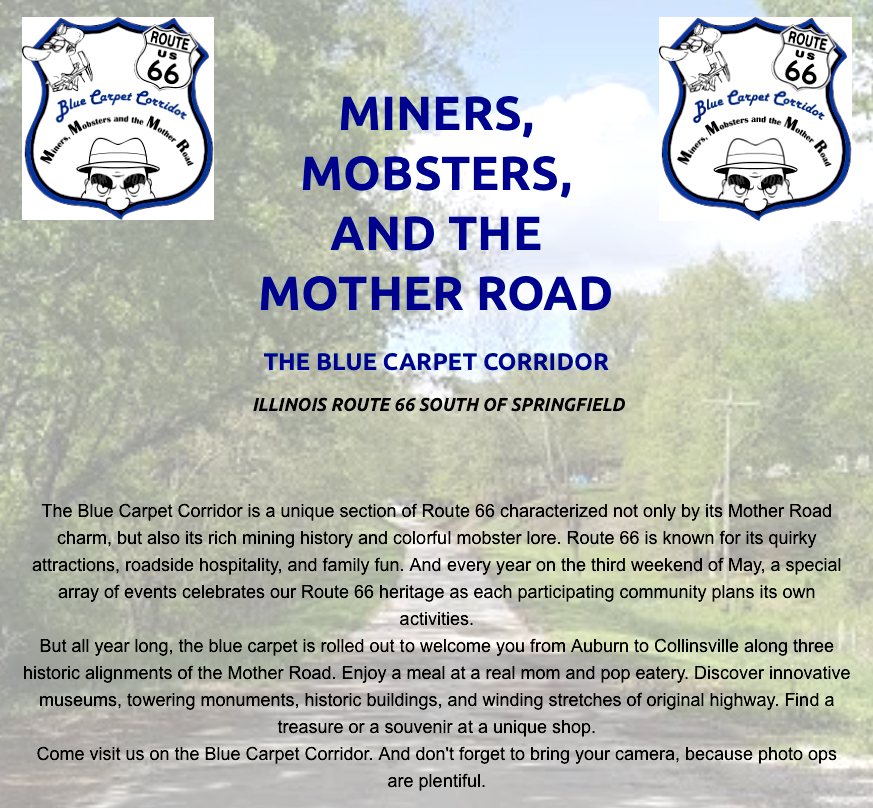