Springfield is the capital of Illinois. It is a fascinating city, most notably because of its profound connection to Abraham Lincoln as seen in the Lincoln Home National Historic Site, Lincoln National Historic Area, Lincoln-Herndon Law Offices, Lincoln Depot, Lincoln Family Church, Lincoln Tomb State Historic Site (Oak Ridge Cemetery) and the Abraham Lincoln Presidential Library and Museum. These sites are well managed by particular national, state and private agencies with excellent public interpretation. Information is abundantly available on the internet for each.

We are delighted to present two interviews about several of these sites. In one interview Site Superintendent Tim Townsend talks about the Lincoln Home National Historic Site, which is a unit of the National Park Service system.
Click on the link: https://mediaspace.illinois.edu/media/t/1_xuxmhb10 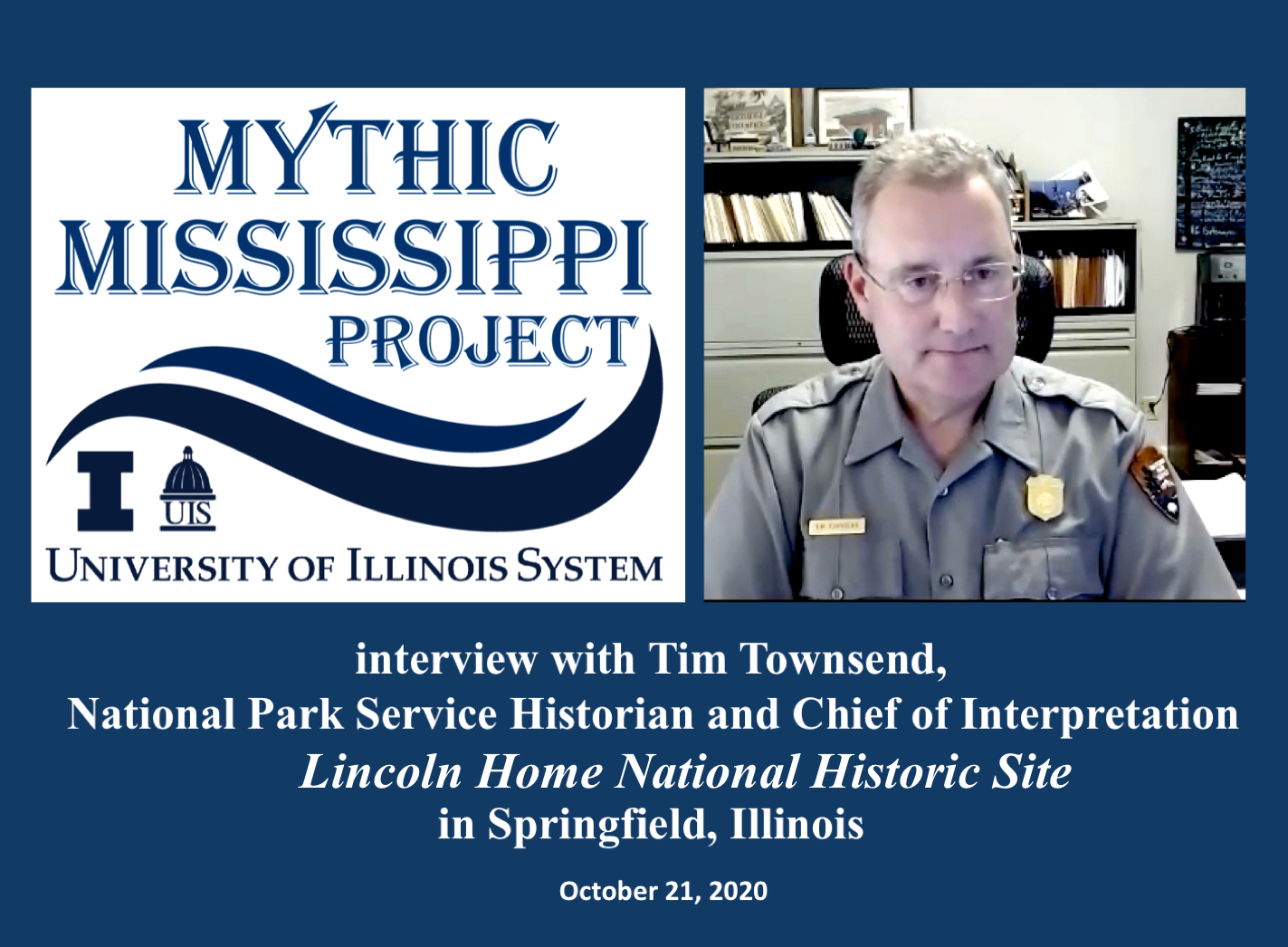 In the other interview Site Superitendent Justin Blandford talks about the State Historic Sites portfolio in Springfield. Click on the link to watch the interview: https://mediaspace.illinois.edu/media/t/1_ptvxus6x 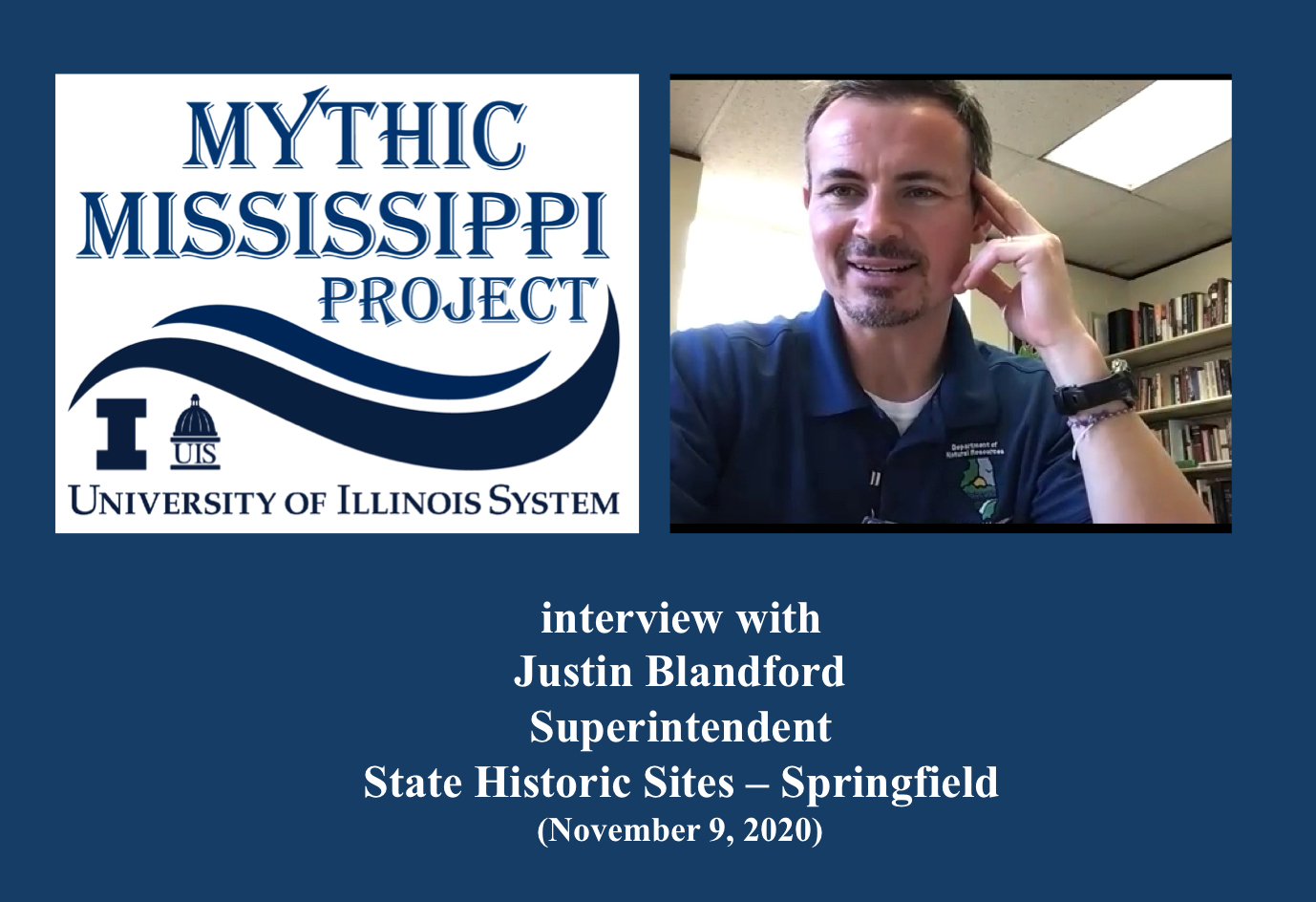 In addition, the Old State Capitol State Historic Site and the Governor’s Mansion were recently refurbished and are open to the public with excellent interpretive programs. Like the Lincoln sites, these two sites are well represented on the web.

Therefore, we use this web page to indicate or reiterate where Springfield layers onto themes of the Mythic Mississippi project and also to present other important histories of the city.

Springfield: African American Heritage
Springfield is the locus of a terrible event of racial prejudice: the 1908 riot, which leveled the prosperous African American neighborhood of Springfield and resulted in the lynching of two Black citizens. Please refer to our webpage: https://mythicmississippi.illinois.edu/african-american-heritage/1908-race-riot-site/ 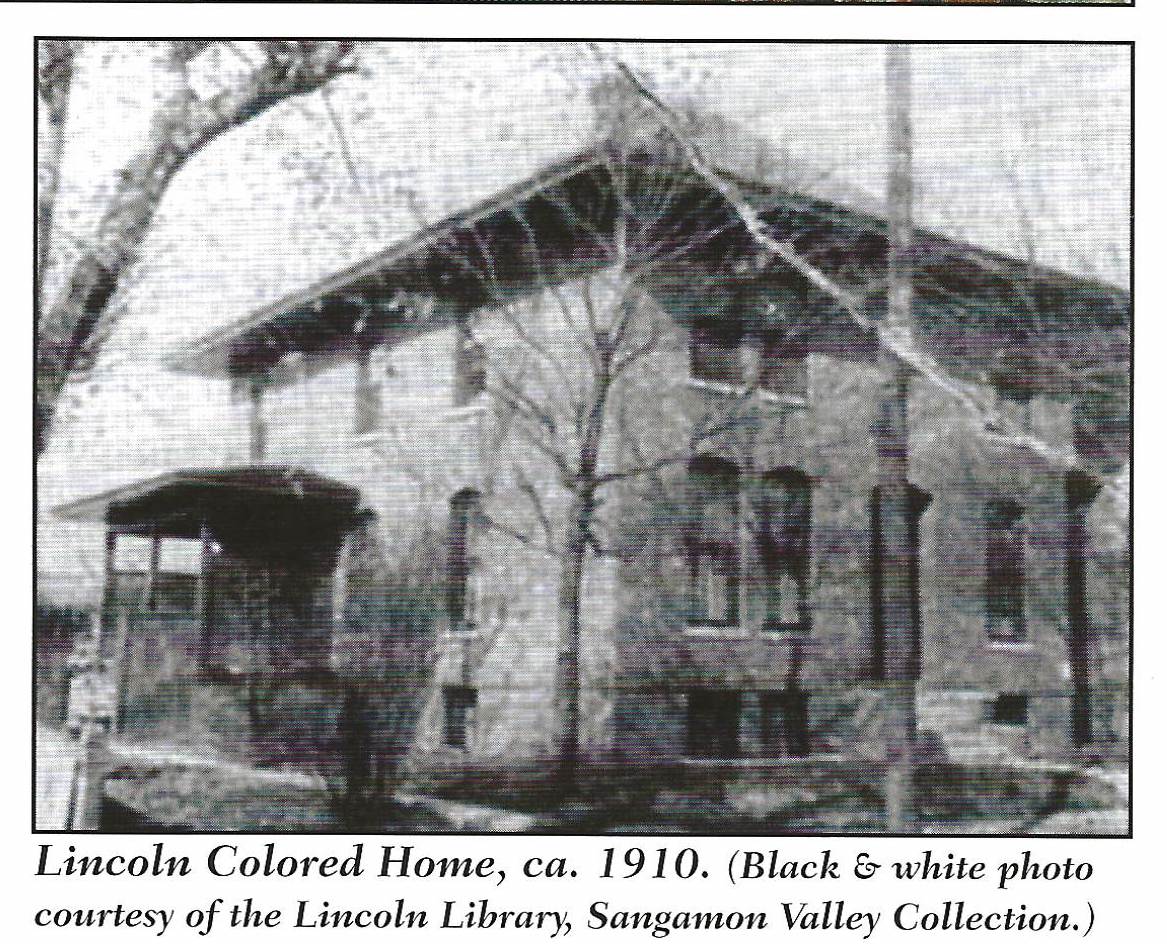 Although a new building was constructed in 1904 thanks to wealthy benefactors, the orphanage closed in 1933. Today, as seen in the photo below, it is derelict. It should be preserved and interpreted, especially because it is on the National Register of Historic Places (1998) – and there are not enough NRHP designations associated with the African American experience in America. A local group is trying to save the building as indicated on their sign in front of the building. That group is led by Lee Hubbard, son of Lyman Hubbard, one of the Tuskeegee Airmen. The Hubbard Estate owns the building. 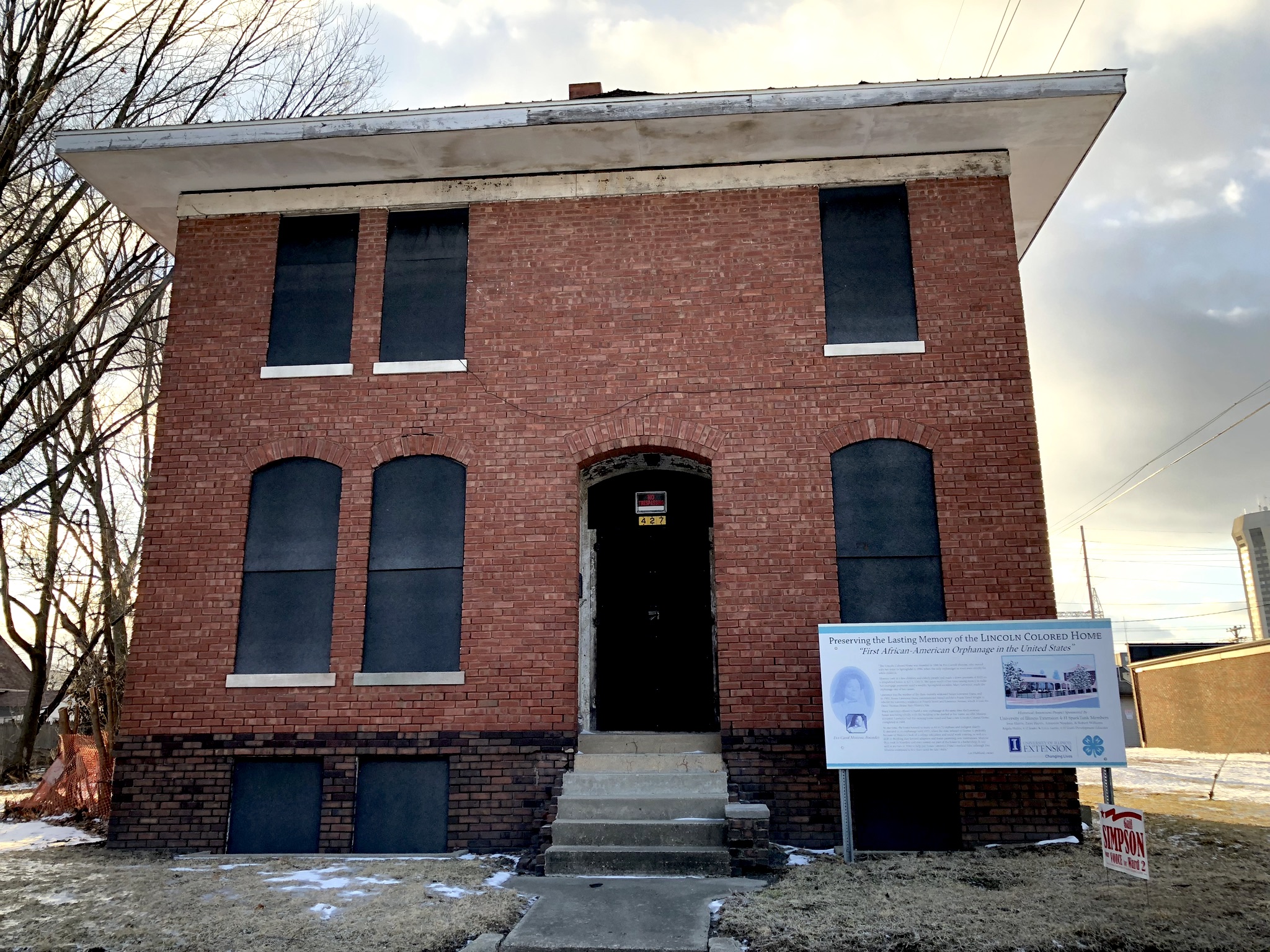 We also include in the African American story of Springfield the Jewish philanthropist, Julius Rosenwald, whose boyhood home was located in what today is the Lincoln Home NPS National Historic Site, because he donated millions of dollars toward the education of African American children in the rural south. We believe that Jewish awareness of prejudice combined with a childhood in Springfield that began while Lincoln was President and continued beyond the passage of the 13th, 14th and 15th Amendments of the Constitution must have predisposed the young Rosenwald to his lifetime concern with race relations. Rosenwald lived in Springfield until 1878.

Springfield: Immigrant Heritage – the Portuguese
A remarkable discovery by one of the project’s graduate students, Emma Verstaete, is the presence of Portuguese immigrants from Madeira in Springfield, which is especially noteworthy because of the direct engagement of Abraham Lincoln and Mary Todd Lincoln with them. Please refer to that webpage: https://mythicmississippi.illinois.edu/portuguese-il/

Springfield: Coal Heritage
The importance of coal in the history of the State of Illinois and in Springfield itself is manifested in the statue of a coal miner on the grounds of the Capitol.  The statue was dedicated in 1964 and commemorates all the Illinois coal miners who lost their lives in mines across the state. Unfortunately, in our opinion, the Illinois State Museum does not have an exhibit on the coal history of Springfield and the state. 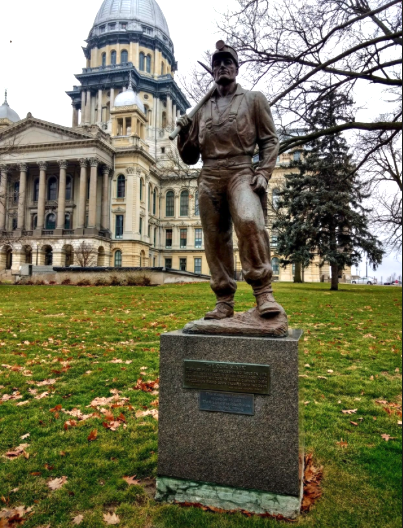 Some references about coal mines in Springfield itself are found in the city’s newspaper, The State Journal-Register. For instance: “State map update reveals 1800s-era mine in Springfield” by Tim Landis, June 18, 2014  and “Digging Springfield: all about the city’s old underground mines” by Crystal Thomas, April 7, 2018. The Sangamon Link web archive has a very interesting article about the role of Springfield in the UMW-Progressives labor war.

Springfield: Mormon Heritage
Because it was (is) the state capital there is a direct intersection of the Mormon story (https://mythicmississippi.illinois.edu/mormon-heritage/) discussed by our project and Springfield. Legal cases played out at the state level in the Old State Capitol between the Joseph Smith, representing his Church of Latter Day Saints, and the State of Illinois and other private actors who found legal fault in particular Mormon actions. Indeed, the granting of a town charter to Nauvoo took place in the Old State Capitol where the legislature met. Joseph Smith’s records indicate that he stayed at the American House, which was Springfield’s fanciest hotel in the 1840s. As an individual, in 1843 Joseph Smith fought an extradition order from Missouri in the second-floor rooms of the Tinsley dry goods store building that were rented by the federal government for the U.S. District Court. That building was later occupied by the Lincoln-Hendon law offices (today a State HIstoric Site). Moreover, the Mormons had passed through Springfield en route to Missouri in 1834 before Springfield was the state capital. 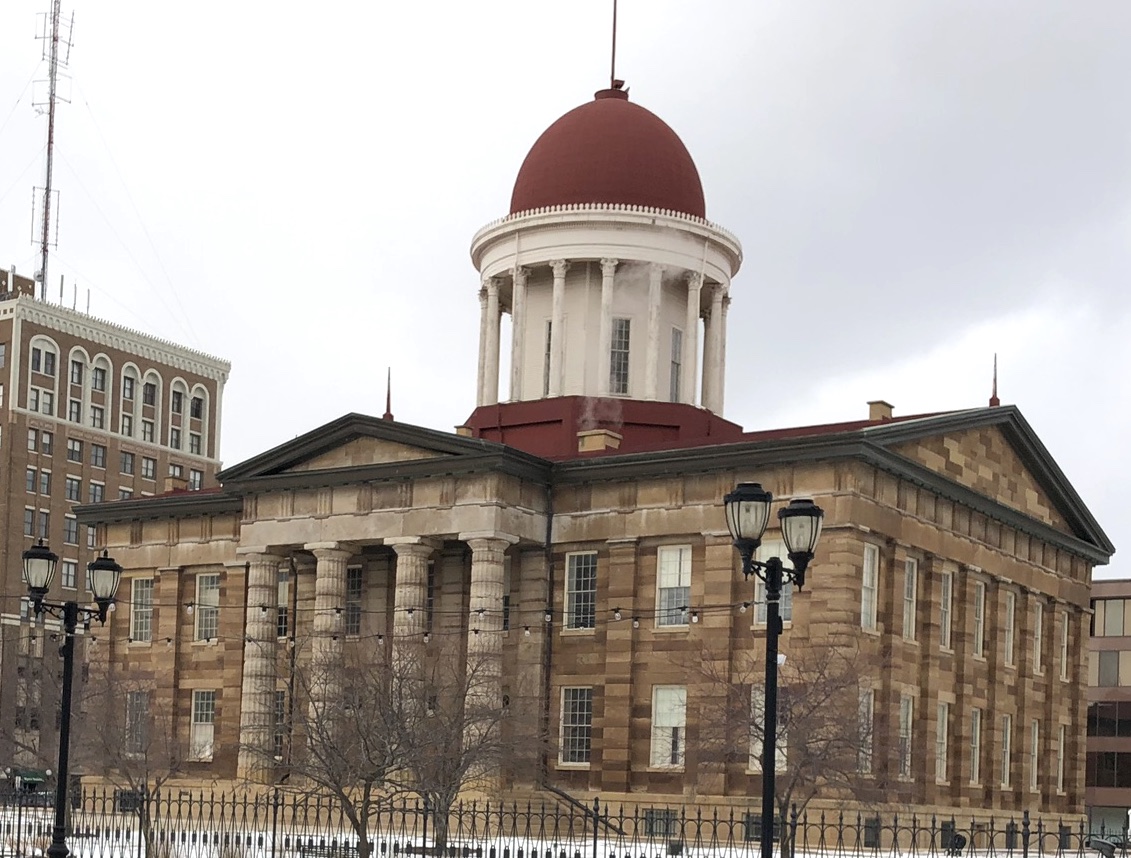 Springfield: Native American heritage
Just outside downtown Springfield, a historic marker commemorates the 1838 passage of 859 Potawatomi people on the Trail of Death that marked their expulsion from their tribal land in Indiana and forced march through Illinois and Missouri to resettlement in eastern Kansas. 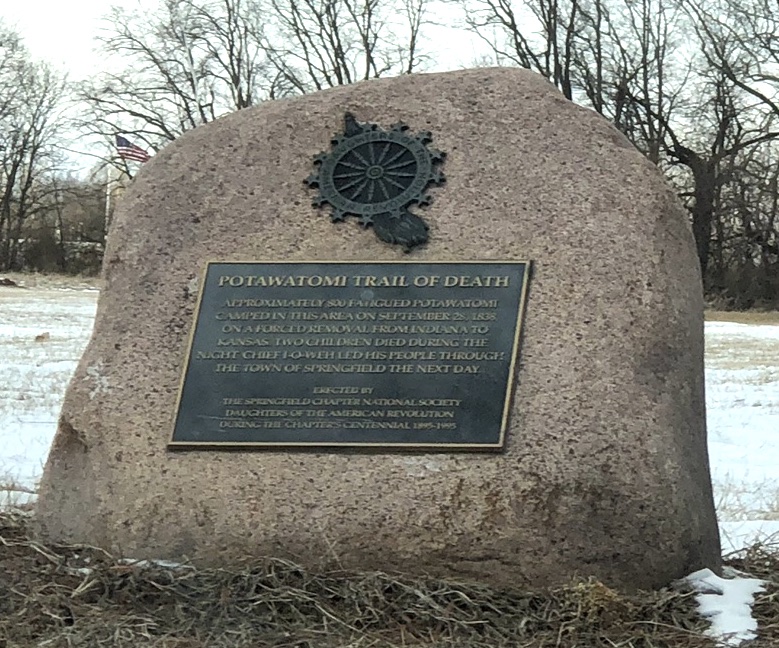 Location: Enter Sangamon County from the east on I-72 (US 36) and take exit 108 to get off I-72. Turn south onto CR 7 E (Overpass Rd.) and go about a mile. Turn west (right) on CR 1 AN. Follow CR 1 AN and cross Coal Bank Bridge. You will go under I-72 on CR I (also named Oak Crest Road). The Trail of Death marker will be on your right on the north side of Oak Crest Road near a golf course.

Then the Potawatomi entered Springfield. In front of 518 E. Adams Street and opposite the Old State Capitol (which was being built at the time), the Potawatomi passed. The commemorative plaque below records their steps through the city.  (There are several other markers in Illinois.) 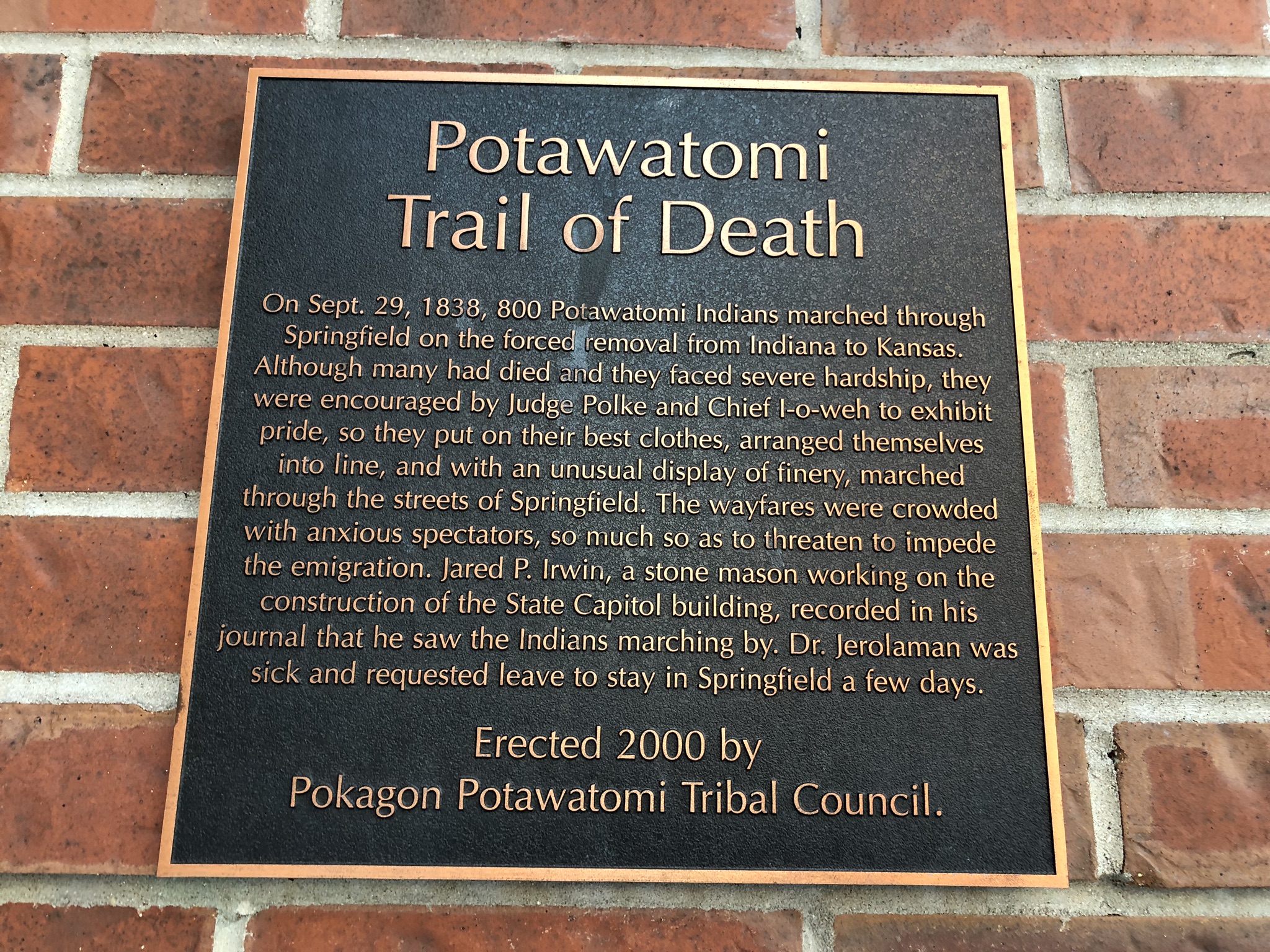 Specifically, this plaque is located on the east wall of brick kiosk that covers entrance to underground parking garage. This is in the Old Capitol Plaza, between 5th and 6th streets, Adams and Washington streets.

Springfield: Popular Culture
Springfield’s celebrated horseshoe sandwich is arguably the most original and authentic cultural offering in and of the city. We are perplexed that Springfield (by which we mean its municipal government and Chamber of Commerce) has not done a good job of marketing and branding this edible creation given worldwide campaigns to achieve “geographic indicator” and “intangible cultural heritage” designations for other foods, meals and culinary practices. Particular restaurants in Springfield do their own variations of the horseshoe and we have seen it spread to restaurants in the region, such as Tilley’s in Mt Olive. We think it is now or never for Springfield to claim as its own this dish: an open faced plate of two thick slices of toast on top of which is meat/ham/hamburger patty on top of which lathered cheese sauce and on top of which are piled french fries). Springfield needs to “copyright” it as the Springfield Horseshoe. A 2020 book has been written about it.
https://www.youtube.com/watch?v=5EAndR0LBMs 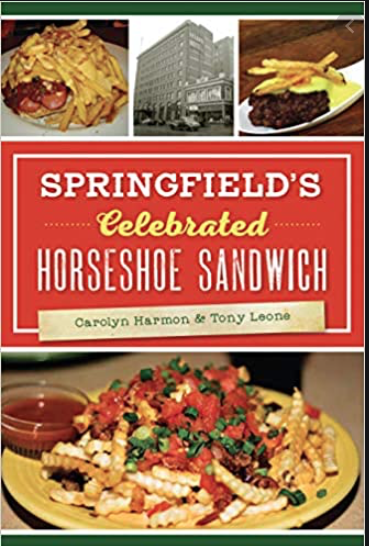 And watch the discussion of Helaine Silverman and Justin Blandford about the marketing potential of this Springfield delicacy.
https://mediaspace.illinois.edu/media/t/1_pk9cku2n 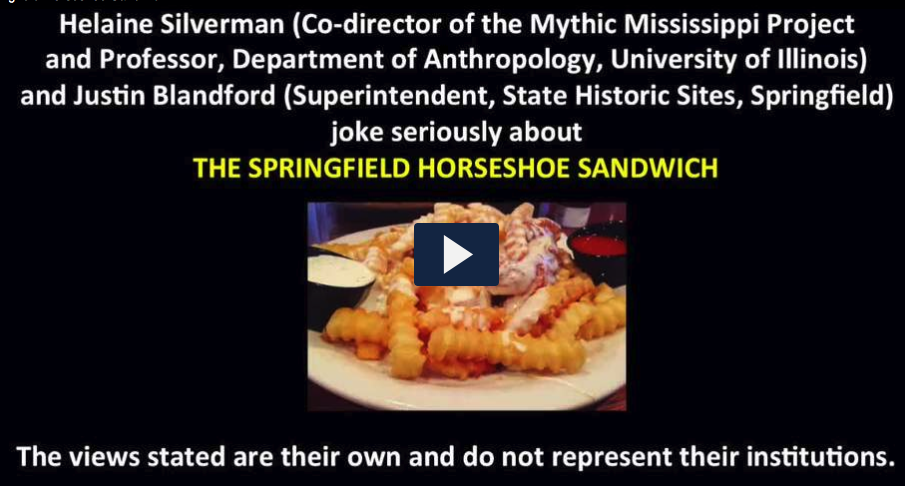