Prospecting for coal began in 1892 and mining in the early twentieth century made Herrin relatively prosperous – including the miners whose condition improved thanks to the United Mine Workers union. As everywhere, however, the industry was rife with danger. Herrin commemorates and celebrates its miners with a major memorial in town (see our coal mining memorials webpage).

Today Herrin is pleasant downstate town. But one hundred years ago Herrin was the locus of a terrible event in the fraught history of coal, labor and small town society in southern Illinois. On June 21-22, 1922 a labor dispute became violent when a mine owner refused to observe a nationwide United Mine Workers strike and, instead, hired non-union men to load his coal onto railroad cars. In what has become known as the Herrin Massacre, 23 men were killed by union miners. This terrible event is represented in a 1940 painting by Paul Cadmus, which is held by the Columbus Art Museum. 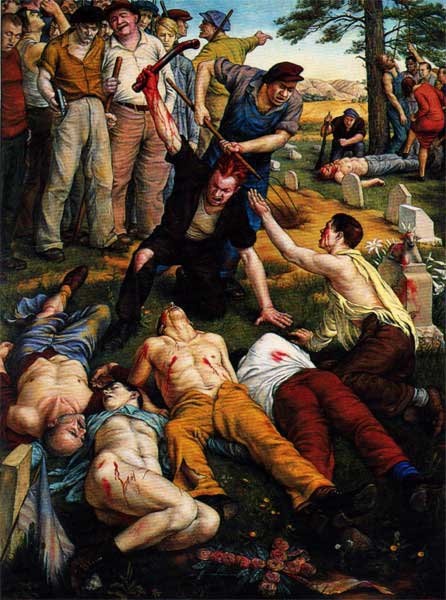 A brief summary (“The Herrin Massacre“) is provided by Herrin native, James Ballowe, in One Hundred Years of Herrin Illinois, edited by Gordon Pruett (Herrin Chamber of Commerce, 2000).

An excellent podcast tells the story of the Herrin Massacre. LISTEN:
https://thisiscriminal.com/episode-132-herrin-massacre-1-24-2020/