Edward Coles railed against slavery throughout his life. Born in Virginia and inheritor of a plantation with slaves, Coles put his plantation up for sale in 1809 and took the slaves with him so as to set them free once he reached non-slave territory. The sale took many years to complete. In 1819 he boarded his sixteen slaves on two flatboats and surprised them on the Ohio River with his declaration that they were free and that each head of household would be given 160 acres of land, which he purchased for them in Illinois. This startling act is depicted on a mural in the Illinois State Capitol (see below) because Coles became the second governor of Illinois (1822-26) and won that race against a staunch pro-slavery opponent. 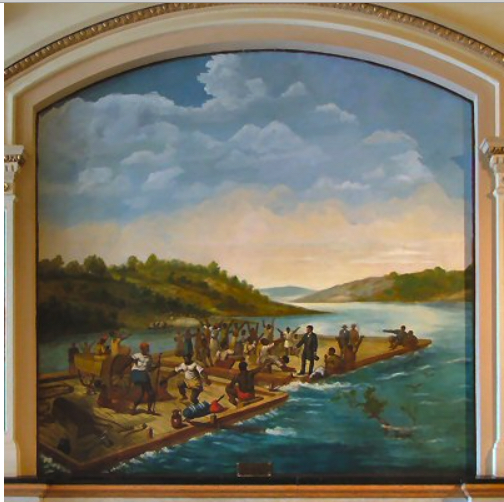 As he had in Virginia, Coles continued to argue against slavery in general and specifically called for the end of slavery in Illinois. He also opposed the Black Code. Coles was instrumental in the 1824 defeat of a pro-slavery referendum in Illinois. He continued to speak out against slavery, even trying to convince his friend, James Madison, to manumit his own slaves. In the early 1830s Coles permanently left Illinois where he had lived for many years in Edwardsville. Coles missed knowing Elijah Lovejoy only by a few years.

In 1928 an Art-Deco memorial was erected by the State of Illinois in recognition of the extraordinary role of Coles in Illinois. The memorial features a bronze bas-relief portrait of Coles, sculpted by Leon Hermant. It is located fifteen minutes from Alton, a hotbed of abolitionist activity. 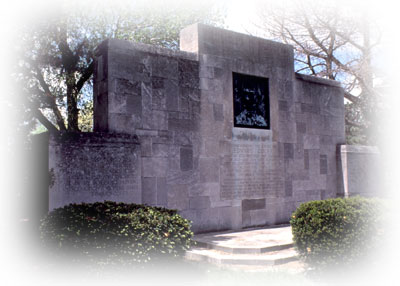 The inscription on the front center of the Coles memorial reads:
“Commemorating the career of  Edward Coles who by steadfastness and courage in 1823 kept slavery out of the Constitution of Illinois. A grateful state marks this spot in the community where his noble work was done. Born December 15, 1786, at Enniscorthy, Virginia.  Died July 7, 1868 In Philadelphia, Pennsylvania. Private Secretary to President James Madison, 1809-1815. Special Emissary of the United States to Russia 1816. Register of the Lands Office in Edwardsville 1819-1822. Second Governor of the State of Illinois 1822-1826.”

The left front of the memorial has the inscription:
“Believing slavery to be both injurious and impolitic, I believe myself bound, both as a Citizen and an Officer, to do all in my power to prevent its introduction into the State.” – Edward Coles